Tableau D'Hôte Theatre still has a little way to go to recover costs incurred by their production of Winter's Daughter. Every little bit helps and will allow the theatre to continue on with other bold creative projects. This includes potentially touring the production, which is impossible in our current financial situation.

Winter's Daughter at the Segal Centre is a story that the Jewish and Italian communities in particularly can feel, The Suburban

Renowed Italo-Canadian barber Gino Chiarella contacted playwright Jesse Stong in 2013. His mother had passed away and he wanted to tell a part of her story: the secret part.  She was a first-generation Canadian from St-Leonard. Many years ago, he had decided to travel to his mother’s hometown of Calabria to visit his grandparents – the inspiration for the characters of this play.

Upon arriving in Southern Italy his grandfather revealed a long-held family secret, gifting him his mother's Star of David necklace, and shared a story of the death and rebirth of their family. The bombshell revelation left him haunted by the fact that his mother never knew she was either adopted or Jewish. Wanting his mother’s story to be shared, he allowed the playwright to adapt their story into one about on sacrifice of love and family.

Directed by Playwrights' Workshop Montréal's Artistic Director Emma Tibaldo, the production featured the talents of Ryan Bommarito, Amir Sám Nakhjavani, and Michaela Di Cesare. Amir and Michaela have been with the project since it was workshopped in 2018, and Michaela is particularly excited to step into a role that calls for her to connect to her Calabrian roots.

The award-winning Tableau D'Hôte Theatre staged the production at the The Segal Centre for Performing Arts from November 27th through December 8th, 2019. Unfortunately, they did not receive public funding for the production, and as so, the FCCI has partnered with them to raise funds from the Italian community and other lovers of the art for them to stage the production on a dime, while still respecting industry standards for artists pay. 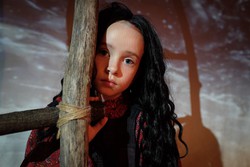