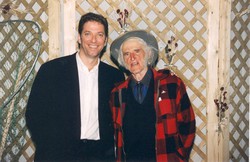 The Richard Adams fondation is a nonprofit organization created to see to the preservation, development and survival of the salmon resource river basin.

Up to now, thousands of dollars have been invested to help realize numerous projects : introduction of incubators to schools, protection of salmon at barrier fences, scholarships, habitat enhancement etc.

Born in 1910, Richard Nelson Adams began guiding salmon fishermen at the age of 12. As the years passed by, he built an international reputation guiding the ordinary angler as well as celebrities such as the president of the United-Stades Mr. Jimmy Carter.

Through the years, Richard Adams' personality is revealed not only by his guiding abilities, his fishing stories and anecdotes, but more so by his attachment to the river and his knowledge of the Atlantic salmon.

Among other characteristics of this renowned guide, we note his eagerness to brave the rapids, to jump from one stone to an other or even, to bolt from ledge to ledge to save the clients fish.

This is how Richard Adams is perceived as a legendary figure, among fishers, he who all during his life, guided with devotion and determination all while maintaining his good humor.