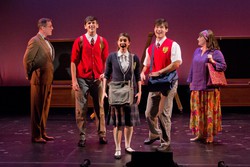 Calgary is recognized internationally as a unique incubator for new musicals, and a place where musical theatre artists choose to live and stay.

Forte Musical Theatre Guild (Forte) is a company on the leading edge of musical theatre in Canada. We are the only professional company west of Toronto dedicated exclusively to new musicals and, with our stable of established and emerging artists, we create engaging and intimate evenings of award-winning entertainment. Forte also creates educational and professional development opportunities for students, writers and young professionals to gain experience in this dynamic art form.

Forte aims to be a global force in new musicals and took our first step in this direction by staging a five-time award winning production at the New York Musical Theatre Festival in 2013. Funny, cheeky and sometime subversive, Forte’s shows leave you with a tune in your heart and a smile on your face.

2018 - Brave Girl - In 2002, Sam and Amy lose their father to the war in Afghanistan. Determined to follow his legacy and do their father proud, the sisters enlist, and support each other through the joys and hardships of military training. As the two girls advance, their individual journeys take a very different course. Will their friendship survive? At what cost? Taking its inspiration from the life of Sandra Perron, Canada’s first female infantry officer, this beautiful new Remembrance musical examines the life of women in power and the sacrifices that must be made.

2018 - Naughty... But Nice! The Big V! - Five Fabulous Years of saucy holiday tunes calls for a Roman numeral, so Forte is proud to present Naughty… but Nice: The Big V! Come join us for everyone's favourite sweet but risqué holiday celebration. A hit parade of favourites from the past and a smattering of new tunes will remind you why, every year, Naughty... but Nice is on your must-see list.

2018 - Crossing Swords - When the boys from St. Mark’s join the girls from St. Anne’s to present “Cyrano de Bergerac”, three friends get more of an education than they bargained for. Love blossoms, jealousies flare, and secrets are revealed that may end their youthful innocence forever as life imitates art in this funny and poignant coming of age story. Winner of five awards for excellence at the New York Musical Festival, “Crossing Swords” is a backstage musical that shows that, sometimes, being yourself is the most heroic act of all.

2017 - Crime Does Not Pay - Forte partnered with Downstage to present this  incisive, heart wrenching, and darkly funny play by Calgarians David Rhymer and Kris Demeanor. These internationally talents have spun a true story into a brand new musical. Bob arrives in the big city in the late 1940s with a sketchbook full of comics about how the little guy always gets pushed into the dirt by corporations and politicians. But when Bob falls for the wrong girl inspiration strikes! BAM!

2016 - Lest We Forget Forte partnered with Lunchbox Theatre to bring you Lest We Forget, which carried on the Lunchbox tradition of remembering the veterans and military personnel who fought so valiantly for the freedoms we enjoy. Conceived and created by JP Thibodeau and Joe Slabe, this show journeyed from WWI to the present day, using music and song to look at the lives of soldiers, their families, and how war affects each of us. Featuring original songs from a multitude of Canadian composers, Lest We Forget is a musical ride through time that honours all that makes us proud to be Canadian.?

2016 - Naughty but Nice - Third Time's the Charm! Winner of the 2016 Betty Mitchell Award for Outstanding Production of a Musical! Because everyone knows the third time’s the charm, we presented Naughty…but Nice! for the third season in a row! We welcomed back Selina Wong and Scott Olynek to the cast and showcased two new faces just to keep things fresh! We presented some new songs by composers from across Canada and beyond, plus some old favourites like Brendan the Brown Nosed Reindeer and Bailey's for Breakfast.  Sometimes racy, sometimes sweet, Naughty... but Nice! leaves you with a song in your heart and a smile on your face!

2014 Touch Me: Songs for a (dis)Connected Age is a one-act musical revue featuring all-new songs composed by writers from across Canada (and a couple of honorary Canadians too!) Funny, tuneful and sometimes poignant, "Touch Me" is bound to get you thinking about the connections in your life.

2013 Maria Rasputin Presents - At the end of her life, Maria Rasputin puts on one last performance in an attempt to rehabilitate her father's infamous legacy. But will the persistent voice of his assassin ruin her plans?

"There'll be puppets and pathos, Terror and tap dance, Drama and drag queens, And ruinous romance, When Maria Rasputin Presents...!"

2012 Jeremy de Bergerac When the boys from St. Mark’s and the girls from St. Anne’s come together to present “Cyrano de Bergerac”, romance blossoms, secrets are revealed and everyone learns that sometimes being yourself is the most heroic act of all.

2011 Title of Show - Forte was thrilled to bring this funny and heartfelt show about chasing your dreams to Calgary audiences.

2011 - Twisted An evening of songs about unconventional relationships all by Calgary composers! Whatever the quirks, the quibbles, the kooks, the kinks, chances are good that something in Twisted will be familiar. After all, who has ever had a relationship without a twist?

2010 - Austentatious After sell-out runs and critical raves in London, Philly, New York (Off Broadway) and London again, Austentatious, a show co-written by our very own Artistic Director, Joe Slabe, came to Calgary to make its Canadian premiere!

"Forte helped me launch my professional career and continues to do so for many budding new artists. By employing seasoned professionals and new artists together, it creates an environment of mentorship and support while showcasing original work. I am forever grateful to Joe and Forte! "

"Working with Forte has allowed me to truly come into my own as a director. Their willingness and thirst for taking emerging artists and showcasing them is what makes working with them so special. Sharing the talents of tomorrow, today. "

"Working with Forte has opened a whole lot of doors for me. Not only have I grown as an actor and singer by performing and working with world class artists in Forte productions, but I've had the opportunity to showcase my own songwriting, for which I received a Betty Mitchell Award. "

"Forte was a jumping off point for my career. They gave me a chance as a young Stage Manager to work on some pretty phenomenal pieces of theatre. Because Forte isn't afraid to work with young artists, the trust given to an unknown is energizing. I am very grateful to Joe and Forte. "

"Forte not only gave me an opportunity to have my writing and music seen on the stage, but has continued to provide motivation, support and encouragement for me to continue writing and composing new works."