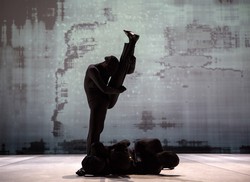 Originally initiated to support the growth of Jolene Bailie’s successful career as a solo artist, the company operates year round and has grown slowly, wisely and successfully over eighteen years, earning a reputation for presenting quality work.  The company hires an ensemble of project-based dancers and plays a critical role in the Winnipeg dance community.

Gearshifting Performance Works has self-presented hundreds of performances and has a significant repertoire of work. The repertoire includes a large body of work by Artistic Director, Jolene Bailie, as well as works by nationally and internationally acclaimed artists.

Gearshifting Performance Works advances the art of dance in Winnipeg. The beneficiaries include: artists who work with the company, emerging and professional dancers, pre-professional dancers, and the public through live performances, studio showings, public rehearsals, artist talks and exposure to new works of art. Governed by a volunteer board of directors, Gearshifting Performance Works follows the Advisory Board Model, serving the needs of the size, purpose, and history of the organization. Since it's inception, the organization has never incurred a cash deficit.