Just after New Year’s Eve, the Western Screech Owl breeding season will begin. Their bright yellow eyes will be searching and straining for a safe place to nest. Why? Severe habitat loss and introduced species have reduced their numbers in Greater Victoria by 90 percent in the past 10 years. Even those remaining struggle to locate nest sites. In Victoria there are just a handful of pairs of these amazing little owls left.

More than anything else, Western Screech Owls need habitat. The older forest that these small owls rely on is rapidly disappearing, and the patches that remain are further and further apart. That is why HAT is launching the Western Screech Owl Habitat Project. We need to protect forest habitat on critical private lands that create connections between our parks. By doing this we will provide important corridors for Screech Owls to find new homes.

Screech Owls nest in cavities - a hole in a dead tree, or wildlife tree. They may also build a nest in an artificial owl box in places where dead trees are not available. We need to raise nest boxes for Screech Owls as nearly all of their natural nesting habitat has been lost. We need to encourage property owners with forest to protect and conserve their forest, to keep dead trees that owls nest in, and to monitor their property for Screech Owl calls.

Your donation will help HAT permanently protect over 50 acres of forest connecting existing parkland with quality Screech Owl habitat in the Highlands, put up nest boxes in forests throughout Victoria, and monitor for the owls. You can make a difference.

How much does it take to make a difference to the Screech Owl? 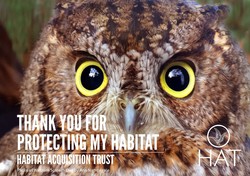