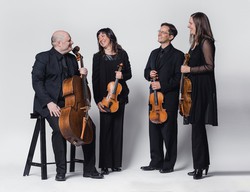 The quartet has also done much to honour the celebrated local artist, Emily Carr. They perform works that pay homage to her, such as Jean Coulthard’s "Pines of Emily Carr", and have incorporated her writings into some concerts, most notably in a summer series held at Emily Carr House in 2006, 2012 and 2014. In 2011, as part of the Victoria Symphony’s Emily Carr Project, the quartet participated in the première of "Stories from Klee Wyck" by local composer Tobin Stokes. The ECSQ is also devoted to contemporary music, and has commissioned three works from Canadian composers inspired by Carr’s work.