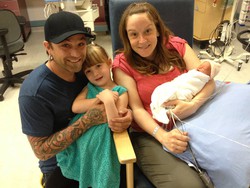 Jesse's Gift Foundation began in 2013 after Jesse Shanahan was born. She was born 9 weeks early on April 16 weighing in at 2 lbs 12 ounces. There was so much love waiting for her in this world and she just couldn't wait to meet everybody. Jesse was a beautiful, feisty little girl right from the start and she brought joy to everybody around her. She spent the first 5 weeks of her life in the Neonatal Intensive Care Unit where Mike, myself and Jesse's big sister Marlee came to visit her every day.

Jesse passed away suddenly and unexpectedly when she was only 6 weeks old. We asked in lieu of flowers or gifts that donations be made to buy a much needed piece of equipment--a central monitor-- for the NICU at the Nanaimo Hospital. This piece of equipment would allow nurses to monitor their tiny patients more closely when they are in a different room. This monitor will help babies and families on Vancouver Island and will be part of Jesse's legacy. To honour Jesse’s memory, Mike, myself, family and friends started fundraising so that we could donate a much needed $60,000 central monitoring system to the NICU in Nanaimo. By the end of August we had met our goal, with generous support from the community, family and friends and the Nanaimo Hospital Foundation. However, this is not the end for Jesse’s Gift.

While Jesse was in the Victoria NICU, Mike, Marlee and I were able to stay in Jeneece Place, which is a 10 bedroom home built on the grounds of Victoria General Hospital, where families of hospitalized children can stay for a fraction of the cost of a hotel. Mike & I were very appreciative of the amenities at Jeneece Place, the proximity to the hospital, the helpful and friendly staff, and the camaraderie that was built with other families going through similar circumstances. When Jesse was transferred back to Nanaimo I was struck by the fact that there was nothing similar in this community. While we were in the NICU I met several families from out of town who had to struggle to find accommodation's and who were struggling with the cost associated with having a child in hospital. The Nanaimo Regional General Hospital provides neonatal and pediatric care to families from all over Vancouver Island. When a child is hospitalized, life outside of that still goes on and bills still need to be paid. A prolonged hospitalization can be financially devastating to a family and there are very few affordable options in Nanaimo. Myself and those of us involved with Jesse’s Gift believe that a home such as Jeneece Place or family rooms located in NRGH are needed within this community. We are currently getting registered as a not-for-profit society and will be moving forward with this project. It will likely be a lengthy process but we are very committed to seeing this through. Please help us in supporting Jesse's Gift vision!

"Be the change that you wish to see in the world."