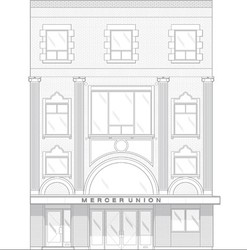 Mercer Union is a non-profit, artist-driven space for contemporary art in Toronto. We enjoy a unique position at the forefront of contemporary art both locally and in Canada – a vantage point cultivated over many years, bolstered by the efforts and foresight of countless artists, members, volunteers, staff and supporters. We are distinctive in our commitment to supporting the production of new and experimental work, assisting artists in realizing pivotal exhibitions.

As we continue to evolve as an artist-run centre, artists and artistic practice remain at the core of who we are and what we do: the spotlight of every dream for our future. We see art’s role in expanding minds and crossing boundaries. We cultivate artists and challenge audiences.

Mercer Union has the will and structure to take on ambitious projects with an elasticity not found in other institutional spaces. We foster an intimate and supportive space for artists to develop and take risks with their work shaping the cultural landscape of Toronto, Canada and internationally.

In 1979, twelve visionary artists identified a cultural deficiency in Toronto and each contributed $1500 of their own money to buy the lease on an 1800-square-foot space on Mercer Street in the name of a cause: “Toronto does not have, has never had, and desperately needs, an artists’ organization dedicated to the exposition of new work in the most advanced forms of painting and sculpture.” Mercer Union has expanded from our original remit to present a spectrum of contemporary art, though at our core we remain a launch pad for artists with bright futures.

We value vision, risk, criticality, artistic freedom, and strive to embody the unique diversity of Toronto culture, and to embrace the multicultural nature of Canada in global artistic dialogues. We commission new work and support artists from project inception to realization with a strong curatorial vision. In addition, we cultivate an ongoing public discourse around contemporary art and its role in society, operating as a platform for critical dialogue and inquiry. Our programming fosters public engagement through artists’ talks, studio visits, performances, lectures, seminars, screenings, educational programs, publications and off-site projects. To that end, we are committed to reducing barriers to participation, including removal of physical, social and financial obstructions.

"My most recent show at Mercer Union [in Toronto] really made me feel anchored in a local ecology and dialogue that I never felt a part of—in its entirety, not just in Canada."

"It is a rare opportunity, to be given the time and financial support to produce works that need years to develop. The support and space to experiment while working with Mercer was a wonderful and enriching experience that I will carry with me for time to come."

"My show at the Whitney was a commission by the non-profit art space Mercer Union in Toronto. Only 25 volunteers made it possible; At the Whitney the expected visitor number for the show is 73,000. I would like everyone to know that spaces like Mercer Union are the backbone for artists like myself."