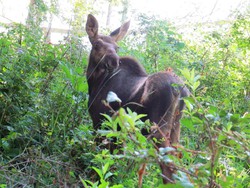 * to provide young injured and/or orphaned wildlife with a safe and healthy environment to mature into adulthood, upon which they are released back to the wild

* on-going research to be compiled and shared with the public, educational facilities/students, government policy makers and professionals

Founded in 1990 the Northern Lights Wildlife Society provides injured and/or orphaned wildlife with a temporary safe heaven, before releasing them back to their natural habitat. The Shelter accepts animal’s province wide and works in close conjunction with other shelters. We specialize in carnivores (mainly bears) and ungulates (moose & deer) but accepts all mammals and birds. Birds typically are forwarded to other shelters that specialize in their care. The Society is actively involved in a number of research projects and is also active in public education about peaceful co-existence with wildlife. In 2007 NLWS started the first official Grizzly Rehab program in the world in cooperation with the BC Government. A total of 21 grizzly cubs have been admitted  so far and are being monitored via GPS collars after their release. Over 450 black bears came to us so far and we could save over 90% of those and release them back into the wild.