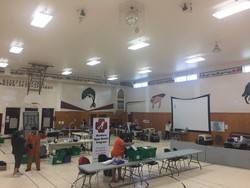 The Northern Spay Neuter Program is a registered Canadian charity based in Thunder Bay, Ontario that works with remote First Nation communities to assist with animal management and health issues. We arrange for veterinarian teams to visit communities in order to examine, vaccinate, treat for parasites, spay and neuter and tattoo community dogs and cats.

NSNP will foster and promote a healthier and better life for northern dogs and cats and safer northern communities.

OUR MISSION AND VISION WILL BE ACCOMPLISHED BY

In the spring of 2015, three Thunder Bay Ontario women who had been deeply involved in dog rescue came together to discuss a critical issue: many Northern Ontario communities had an overpopulation of dogs and cats because there were no veterinary services. No veterinarians meant dogs were breeding at will, many dogs were not healthy, many dogs were hungry, increasing number of dogs were aggressive and posing a danger to the communities. Feeding programs and rescuing these animals were only a band aid to the bigger problem. These communities needed to receive proper veterinary services!

The group of three women soon became a group of five and our Northern Spay Neuter Program was born. It started as an extension of The Feeding Program for Northern Dogs, a non- profit group that had been in operation in Thunder Bay for three years. Then it took on a life of its own!

We formed a Facebook group and with invitations and help from community members from Mishkeegogamang and Wunnumin Lake, we set out to fundraise for our first clinic. We also asked for help from individuals and groups who were already offering veterinary clinics in Northeastern Ontario and soon we connected with Dr. Pauline Van Veen from Barrie. She agreed to work with us on our first initiative. The response from other veterinary professionals to our plea for help on Facebook was amazing. And so with Dr. Van Veen, Dr. Jack Hansen and Dr. Calli Thompson and their staff from Northwestern Animal Hospital in Thunder Bay, and veterinary staff from Fort Frances and Sudbury Ontario, we headed for Mishkeegogamang and Wunnumin Lake in September of 2015. Through dog sponsorships and donations from other groups like Finding Them Homes in Barrie, we raised enough money for these two clinics.

Then the requests for clinics began to pour in and NSNP also grew in numbers to now include seven high energy women on our working Board of Directors. More fundraising within communities and by the NSNP  resulted in enough funds to support clinics in March of 2016 in Neskantaga and Webequie...and then Gull Bay and Whitesand First Nations in September 2016.

A total of over 300 dogs and cats were spayed or neutered and received examinations,  vaccinations, parasite treatment and tattoos between September 2015 and September 2016.

NSNP  became a REGISTERED CANADIAN CHARITY on January 1, 2017. Look for ongoing information about upcoming clinics on this site or our Facebook page Northern Spay Neuter Program or contact us at northernspayneuter@gmail.com

Since then NSNP has not looked back. Our clinics in Mishkeegogamang, Wunnumin Lake, Neskantaga, Webequie, Gull Bay, White Sand, Big Grassy River, Sachigo Lake, Lake Helen and Rocky Bay First Nations have allowed us to offer wellness and spay neuter clinics to well over a thousand dogs and cats.... with more to come.