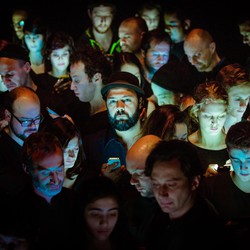 Founded in 2011 by Mani Soleymanlou, Orange Noyée holds its name from a Persian New Year tradition. All throughout the New Year celebrations, among the decorations found in the household, there is an orange floating in a bowl full of water, symbolizing the earth in its universe. Orange Noyée symbolizes the drowning of the earth – the orange – in its universe.