The Orchestre symphonique de Laval’s current artistic director, Alain Trudel, is among the most soughtafter conductors in Canada.A much sought-after conductor, Alain Trudel has led orchestras in the United Kingdom, United States, Japan, Hong Kong, and South America. Gifted with a keen spirit of collaboration that is very much appreciated by his colleagues, he has worked with highly renowned artists such as Ben Heppner, Anton Kuerti, Measha Brueggergosman, Herbie Hancock, Alain Lefèvre and Pinchas Zukerman.Previously, the orchestra benefitted from the talents and know-how of seasoned conductors such as Jacques Lacombe (1993-1995) and Jean-François Rivest (1995-2006).

Through you donations, you will greatly contribute to our rich and creative musical seasons!

The Orchestre symphonique de Laval wants to keep developping our programs meant for the younger citizens of the city of Laval. Each year, the Orchestra is working closely with 6000 young students for the pleasure of our audience and of our young musicians.

By contributing to the Orchestre symphonique de Laval, it is like making yourself a gift full of passion and happiness! 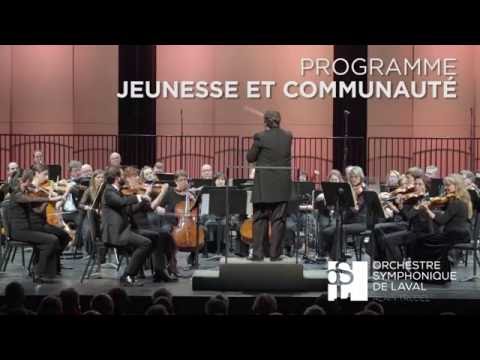