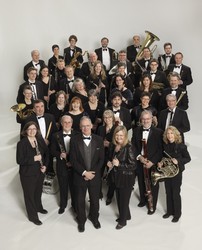 PSWE aims to perform wind music at the highest possible level, and to further public awareness of wind ensemble repertoire. The repertoire represents all aspects of the wind band tradition and includes traditional and new works from marches and folk song settings to art music. PSWE is a strong supporter of Canadian composers and regularly seeks out new and unusual works. Music education is both a goal and an accomplishment of the ensemble and the group has developed a workshop program that reflects this. Another education initiative of which the ensemble is proud is the annual Youth Soloist Competition. Talented brass, woodwind or percussion soloists aged 23 or younger are invited to submit an audition tape. Winners are invited to solo with PSWE at a concert at Evergreen Cultural Centre.

Based in Vancouver, British Columbia, PSWE is made up of 45 musicians drawn from all over the Lower Mainland. Many of them are "outstanding amateur players who make their living doing something else". It was a group of players looking for musical challenges that brought the Pacific Symphonic Wind Ensemble (PSWE) into being. Today, over 20 years later, the ensemble has grown and matured to the point where it takes a leading role in music education in British Columbia and is committed to supporting Canadian composers. As PSWE evolved, reaching into the community increasingly became a focus. They now have a regular series of performances at Coquitlam's Evergreen Cultural Centre.

PSWE is a member of the Alliance for Arts and Culture, and the ArtsConnect Tricities Arts Council.