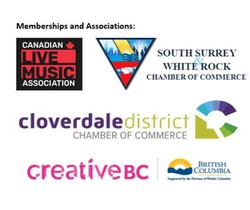 To fund and facilitate the future of live music in communities outside major metropolitan areas and ensure that performers and concert support workers are paid a sustainable, living wage.

Penmar Community Arts Society consists of a variety of professionals who have an interest in creating live music experiences for the benefit of artists, audiences and the local music economy and we work with various community partners and advisors in the live music industry in BC and Canada.

We develop sustainable fundraising programs to fund the future of live music.

We provide grants to support live music venues and the artists that play there.

We provide live music booking, production and marketing services to communities outside of major metro areas in Canada.

Penmar Community Arts Society is a registered Canadian Charity that is governed by a volunteer Board of Directors. It was formed in Penticton in 2013 with the goal of establishing and operating a performance arts centre in a heritage building in Penticton, BC.   When the building was bought out by a winery in 2015, Penmar changed its focus to a Provincial one and in 2016 relocated its operations to Surrey, BC and has been creating fundraising initiatives and supporting live music events in the South Fraser Region as well as Penticton ever since.

Over $1 million into local music economies

2017/2019 : The Flamingo – 155 shows over a year in three venues. Performances included local showcases in a variety of genres, comedy nights, cultural events and a corporate battle of the bands.  Genres encompassed were rock, country, funk, metal, punk, tributes and urban.

2018 : Canada Summer Jobs Program. We hired and worked with 5 students over the summer providing supervision, mentorship and practical experience in music business related skills such as social media marketing, event planning and execution, graphic design and branding and talent booking and hospitality.

2019 : Canada Summer Jobs Program. We hired and supervised 2 local youth with connections to the local music industry to develop branding, sales and marketing plans for Music Lottery and the Cloverdale Concert Series.

Exposure Bucks – Time and time again, artists are asked to play for free, often for charitable events. The Exposure Bucks Program provides artists with a flat fee for playing a charitable event.   This does two things a) pays the artist fairly for their commitment and time and b) lowers the overhead costs for the charity thereby allowing them to raise more money. It’s a win-win!  Charities raise money.  Bands get exposure....and they get paid.

My First Tour - Facilitating touring opportunities to locally established bands that are ready for short tours of 4-6 shows and/or opening for larger acts.

Penmar Community Arts Society spends money in the region where it is donated.  Your donation supports local programs in your community.

"I support this project (Music Lottery ) for its support of venues and the artists that play in them, and also for their plan to use this to open dialogue between artists, music venues and other businesses in the area. "

"Music MadHouse Records acts as an agent for Music Lottery and we understand the value in supporting our local British Columbia music industry through Penmar's lottery program."