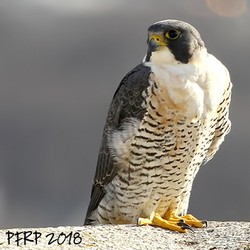 The near-demise of the Peregrine Falcon over much of it's North American breeding range was primarily caused by pesticides such as DDT after World War II. With a ban on the use of this persistent toxic chemical in Canada and the U.S. in the early 1970s, coupled with massive conservation efforts, the Peregrine began a steady recovery. Unfortunately, there is continued concern for the welfare of this "at-risk" species. DDT is still being used in several countries in Central and South America where the Peregrines winter and birds wintering in South America come north in the spring with toxic chemical residues in their body tissues which can then be passed on to the Peregrines when these birds are taken as prey. Even with all the success Peregrine recovery efforts have enjoyed there are concerns that new classes of chemicals (such as flame retardant) may prove to be injurious to Peregrines and other birds of prey.

Thus, for the Peregrine Falcon, being on top of a food chain has its price. For the human race, the Peregrine, like the proverbial canary in the coal mine, is a barometer of environmental health.

An international conservation program began in the 1970s in Canada and the U.S. in an attempt to bring back the Peregrine Falcon. A procedure known as "hacking" was suggested by experienced falconers as a means of reintroducing young captive-bred peregrines into the wild. Regarded initially as an experiment, the reintroduction program has had success, particularly in urban areas which have the advantage of increased security from predators such as Great Horned Owls and reduced toxic chemical loads in such resident birds as pigeons. Urban releases are also easier to monitor and equally important, they provide an opportunity for the public to watch peregrines living in the wild.

The Project began as a recovery initiative of provincial government in 1981. In 1998, the Project became an independent not-for-profit conservation organization with official charitable status. With the increasing number of "at-risk" species and because most of our activities are on-going, we are usually not eligible for grants. The Project is volunteer-driven, relying almost entirely on public donations to support its recovery efforts.