Beatrix's foot infections came back with a vengeance and she was not tolerating being in care at all well.  By this point she had been in care for 22 months.  We had to consider her quality of life and our potential to successfully treat her infections and get her back into the wild.  It was a difficult decision but her needs were greater than our desire to see her flying free again so she was humanely euthanized.  More information on Beatrix's Passing.

If you would like to make a donation in Beatrix's memory, please feel free.  We will use the funds to help keep her large extended family up and flying.

This is the short version - to read the full version, please visit Beatrix's page on our website.

Beatrix hatched at the Radisson Hotel in downtown Winnipeg in 2011, the daughter of our resident pair Princess and Ivy. She returned for a short visit in the fall of 2013 where we caught up with her in West Winnipeg where she was hunting and eating giant water bugs. Disgusting, but very nutritious food choice but she looked great doing it - just like her dad Ivy - he was by far our most accomplished hunter, his chicks always had more than they could eat, which is saying a lot! Beatrix then turned up bright and early in the spring of 2014 and paired up with Beau in the West Winnipeg territory when Beau's long-time mate, Jules, failed to return. Beatrix and Beau had four chicks that year - Beaumont (who returned to Winnipeg in 2017), Bishop, Bristol (nested with Sundance in 2016 and 2017) and Belle. Beatrix returned again in 2015 and found herself with a new mate, Ty, after he won a territorial battle with Beau. Ty and Beatrix had two female chicks together - Tiggy and Tuppence.

In March 2016, Beatrix was injured during a hailstorm in the Dallas/Fort Worth area and was transported to the nearby Rogers Wildlife Rehabilitation Centre. She spent an eventful summer in Texas filled with severe weather events (tornadoes et al) and an outbreak of West Nile Virus which birds in care/captivity are particularly susceptible to. Her recovery was taking time, more time than she had in Texas.  The laws to protect wildlife in rehab/captivity set a limit on the amount of time a bird/mammal can remain in captivity if the plan is that they be re-released into the wild.  So we had to make plans to transport her across state, provincial and international borders.  Sounds simple, but fortunately it is not.  Why fortunately? If it was easy to move protected species like the Peregrine Falcon, all sorts of abuses could occur.

Even with support from everyone on both sides of the border, it still took us five months to get all the necessary paperwork in place. That's when things really started to rock'n'roll! The last permit was signed on November 29th and arrived in Texas the following day. On December 1st, Beatrix and her travelling companion, Kathy Rogers, began their trip north on flights donated by American Airlines and WestJet. They arrived in Winnipeg just after midnight the same day. The following day, Kathy and Beatrix headed out to meet with Lisa of the Prairie Wildlife Rehabilitation Centre (PWRC) where Beatrix will be continuing her rehabilitation.

Beatrix has a persistent foot infection which like getting her back to Manitoba sounds simple, but foot infections, particularly ones that required surgery take a long (long) time to heal. The Project has been supporting her veterinary appointments and treatments as well as ensuring she has the best quality food to aid with her recovery.  Specifically quail which are most nutritious domestic food source for peregrines in care/captivity.  But they aren't cheap - it costs about $2 per quail to purchase and ship to Winnipeg and a peregrine can eat one or two quail a year in care.

If you would like to support Beatrix's recovery, please consider making a donation to this campaign through CanadaHelps or through the Peregrine Project website. 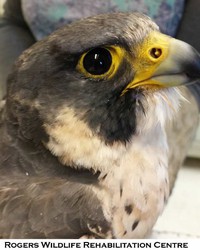