Peregrine Falcons don't only fly high, they nest high too. Almost a hundred years ago as our cities got bigger and higher, peregrines started looking at skyscrapers as alternates for their traditional cliff-face ledges.

One of the most famous (and earliest) urban-nesting peregrines was a female named Scarlet who appeared at the Sun-Life Building in Montreal in 1936.  The first couple of years her eggs failed to hatch because she was nesting on a bare ledge on the 20th floor.  It wasn't until 1940 when a nestbox with sand/gravel was installed that Scarlet's eggs finally hatched successfully. She and three successive mates nested at the Sun-Life Building for a total of 16 years. Out of the 50+ eggs she produced over the years, only about half hatched which researchers believe was due to the increasing effects of DDT in Scarlet's system.

Since the Manitoba Peregrine Project began in 1981, we have worked to provide nestboxes at suitable sites in southern Manitoba for any peregrine wishing to nest in them.  Returning peregrines show us new sites they like and we install nestboxes for them.  We check the boxes each year to make sure they are a safe space for the peregrines.  This usually includes replacing the nesting gravel and/or repairing/replacing nestboxes themselves.  But just as every nestsite is different, our maintenance of each nestsite is different depending on the nestsite, the immediate location and the way the adults and chicks use the nestsite.  For example, a new nestbox we installed we need to rotate it 45 degrees and change the roof design to provide the chicks with more protection from the hot summer sun.  When the chicks were a couple of weeks old, we found that it was much easier for them to climb out than it was to climb back in, so we installed a low step to make it easier for them to get back over the wall.

If you would like to support our on-going efforts to provide safe and secure nesting locations, please consider donating to this campaign. 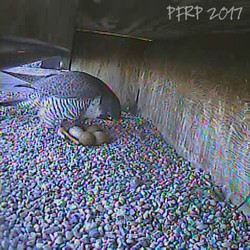