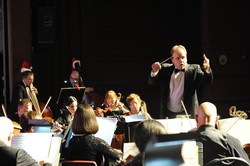 Quinte Symphony is committed to enriching the cultural life of Quinte Region through leadership in the presentation of classical and Canadian orchestral music at highest performance standards.

Quinte Symphony is also committed to actively promoting and encouraging the musical development and literacy of area students through its education outreach programs and the communities served through its community outreach initiatives.

Since Quinte Symphony’s founding in 1960 by Music Director Stephen Choma as the Eastern Ontario Concert Orchestra, we have presented soloists performing orchestral music, including many Canadian works. At the time of the orchestra’s formation, there were many highly trained, local amateur musicians who were passionate about music. This new orchestra also provided an opportunity for students to perform alongside more experienced musicians.

After Maestro Choma's untimely death in 1983, a board was formed and professional Music Directors were hired to keep his vision alive including notable names in musical circles such as Kerry Stratton and Clifford Crawley. Gordon Craig became Music Director in 1990 and transformed Quinte Symphony into a small symphony orchestra capable of playing from the standard symphonic repertoire. Twenty-five years later, his mission accomplished, Maestro Craig retired.

In 2015, and after an exhaustive search, Quinte Symphony's Board of Directors were very excited to announce that the torch had been passed to Dan Tremblay. Maestro Tremblay grew up in Gaspe on the Quebec side and at 17 years of age, moved to Montreal to study music where he resided for 20 years. He holds a Master of Music degree in Performance from McGill University and a Bachelor of Music in Performance from Université de Montréal.

Since 2001, Dan has been a faculty member of the Queen’s University School of Music where he teaches trumpet, Brass Techniques and Methods classes and is responsible of the brass and percussion studio. He also conducts the Queen’s University Wind Ensemble, Brass Choir and Trumpet Ensemble. Since 2006, he has been the adjunct lecturer in trumpet and chamber music at the Crane School of Music of the State University of New-York in Potsdam.

The symphony self-presents a 4 concert MasterWorks series, an annual 'Tribute to the Brave' concert in partnership with CFB Trenton's 8 Wing Concert Band and the 8 Wing Pipes and Drums at the National Air Force Museum of Canada in Trenton. A concert targeted at youth audiences has also become a part of the season.