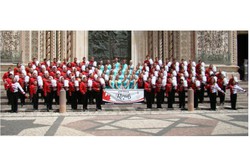 The mission of the Red Deer Royals Concert and Marching Show Band is to facilitate an environment of musicianship, learning, friendship and mentoring for musicians and colour guard aged 11-21 residing in Central Alberta and surrounding communities. This band promotes musicianship, leadership, teamwork, community service and pride.

The Red Deer Community Band Society was formed by an Act of Council by the City of Red Deer in 1968. The Society was created to "administer and support Red Deer's Community Band program and was to include the product of first-class adult and youth concert bands and marching bands for the purpose of promoting the City of Red Deer as well as enhancing the cultural climate of the City". The Red Deer Royals Concert and Marching Show Band have been performing under the auspices of the Red Deer Community Band Society for over 40 years. In that time, the Red Deer Royals have developed into an award winning band performing and competing for audiences locally and internationally.

The Red Deer Royals proudly serve as musical ambassadors for our City and The Province of Alberta. Since their inception, the Red Deer Royals have become deeply embedded in the culture of Red Deer as performing for and entertaining audiences of Central Alberta is the core of our band program.