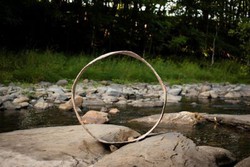 Founded in 2012, the Rozynski Art Centre is dedicated to research, dissemination and production in field of sculpture and ceramics. Its activities, including exhibitions and resedencies, focus on collaboration, creation and diffusion and are primarly aimed towards professionals, although a range of training classes are also offered to the general public.

The Rozynski Art Centre is located in the small village of Way’s Mills in the Eastern Townships of Quebec. Nestled in the valley of the Niger River, the property of more than two acres is on the banks of this pleasant stream. The building, originally the primary school of the village, was bought by Stanley and Wanda Rozynski in 1964. There they established the Rozynska Pottery School which came to be known as an important centre in a region known for the richness of its creative arts

These two artists, born of Polish immigrant parents, studied and trained in New York before opening their studio on Mansfield Street in Montreal. Besides selling from his own place Stanley also exhibited in the Galerie Libre. Keen to promote sculpture, in 1961 he became one of the founding members of the Quebec Sculptors Association, and a few years thereafter, finding themselves limited in their city space, they opted for the much larger and more charming spot in Way’s Mills.

In equal parts a studio, a home and a teaching school, between 1966 and 1983 students by the dozen came in the summers for two week intensive training courses built around the concepts of discussion and creative collaboration. Besides an enormous windowed studio facing south, the building has 12 bedroom spaces, multiple bathrooms, and a common space with kitchen and dining room as well as a living room with stone fireplace. It is here that literally hundreds of student gathered over the years to be initiated into the craft of pottery, honing their skills under the master’s eye of Wanda. Always active members of the artistic scene, the Rozynskis counted among their friends many well-known potters and sculptors. Thus the Rozynska Pottery School was key to the development and renaissance of ceramics in Quebec.

And they were also philanthropists; Wanda and Stanley funded in perpetuity an annual grant at Bishop’s University called “The Wanda Rozynska Scholarship in Fine Arts”, enabling a student to pursue training in tactile arts. Besides this, and with his goal of encouraging public accessibility to the arts, just before his death Stanley founded the Rozynski Art Centre thus donating with his late wife the gift of his property and belongings, including his and Wanda’s works and their collections of art by other masters.

Thanks to the generosity of these two pioneers who devoted their lives to the arts the Rozynski Centre is now in the process of accomplishing their life’s mission. That is why the logo of the Centre is in the image of the stamp which Wanda used to sign her pieces.