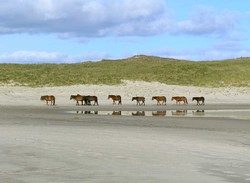 About the Sable Island Institute

The Sable Island Institute is a community of Sable Island experts, advisory and resource people, and supporters who contribute a wide range of experience, skills and interests in science, education, arts and culture. The Institute is registered under the Canada Not-for-profit Corporations Act S.C. 2009, c.23, and is a charity registered with the Canada Revenue Agency. In support of conservation and environmental protection objectives for Sable Island, the Institute conducts research and educational programs both on and off the island.

Sable Island, remote, isolated, and surrounded by the Northwest Atlantic Ocean, is located far off the coast of Nova Scotia, Canada—the nearest landfall is 156 km away. Being roughly 45 km long with a maximum width of 1.3 km, the island’s landscape is comprised of sand dunes and broad areas of heath and shrub communities, with small freshwater ponds and seasonal pools, and patches of cranberry in moist hollows. Five species of orchid grow in sheltered areas of vegetation and around the freshwater ponds. There are no native trees on the island.

Sable Island is home to a population of wild horses, now numbering about 500—the number fluctuates from year to year. Two species of seal breed on the island, Harbour Seal and Grey Seal. It is the world’s largest Grey Seal colony, with >50,000 pups born during the December-January breeding season. The island is the only nesting location for the Ipswich Sparrow, and it provides habitat for other rare species of plants and animals.

The island has a dramatic history of shipwrecks, loss of life, and rescues. For about 200 years Sable Island was primarily known as a serious hazard to navigation and is still sometimes referred to as “The Graveyard of the Atlantic”. The life-saving station—the Sable Island Humane Establishment—began operation in 1801 and continued until it was phased out in the mid-1900s when modern technology greatly reduced the risk of shipwrecks.

The Role of the Sable Island Institute

Sable Island is now protected as a National Park Reserve (established in 2013). In support of conservation and protection objectives for Sable Island, the Institute is committed to generating knowledge and understanding of the island’s environment through research and monitoring; providing educational opportunities through graduate studies, internships, and in-residence programs; and public awareness and appreciation through outreach and interpretive services, both on and off Sable Island. Recognizing that connecting with the island is not only an intellectual experience but also an emotional and inspirational one, the Institute’s work emphasizes the integration of arts and science.

Sable’s unique geography, physical beauty, history of shipwrecks, and cultural mystery contribute to people’s fascination with the island. Although Sable Island is a national park, concerns about the island’s ecological integrity, combined with the cost and logistical challenges of travel, limit the number of people who can visit and experience this remarkable location. To provide Canadians with a way to connect with the island without travelling there, the Institute will bring Sable Island to Canadians through exhibitry, virtual experiences, school and citizen science programs, workshops and publications.