A Century of Applause

Opened as the Temple Theatre in December 1919, Brantford’s Sanderson Centre for the Performing Arts is now celebrating its 100th Anniversary.  The Sanderson Centre Foundation has captured and chronicled the engaging history of this architectural gem over the last 10 decades with a handsome, hard cover coffee table book. A treasured keepsake or a wonderful gift, this commemorative book celebrates an important milestone in Brantford's history.

Gifted to you, with gratitude, for donations to the Sanderson Centre Foundation of $500 or more.

For the cheerful gift giver, this wonderful keepsake is also available for purchase ($50) through the Sanderson Centre box office.

Each copy includes a complimentary E-Edition 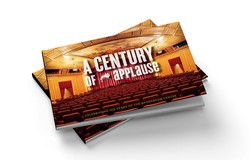