SAVE YOUR SKIN FOUNDATION

Registered Name: SAVE YOUR SKIN FOUNDATION

They did it! What a weekend for these two incredible guys! Chris Isfeld and Shawn Bjornsson crushed this 30km race across Frozen Lake Winnipeg to raise funds for Save Your Skin Foundation and the patients we help. Read below for more information on the incredible race and Chris' journey with melanoma.

"My story began sometime during the summer of 2017. I had been experiencing lower back pain for a few months that nothing seem to relieve, but could, like anyone in their mid-forties, be attributed to any number of things. Then, one Friday evening late that November, I felt an intense pain on my left side, just behind my lower ribs that dropped me to the floor. The intense pain lasted only a few minutes, but things never felt normal after that.

An ultrasound revealed I had 3 liver lesions and large masses on both adrenal glands. The week before Christmas 2017, I had a biopsy done of the largest liver lesion, that to everyone’s surprise, confirmed melanoma. Additional scans confirmed that the disease was very advanced and the tumor burden was intense, with many of them doubling in size since the initial ultrasound. At one point, an oncologist said that it would be easier to list the areas not affected then to list what was.

The back pain began to intensify and my overall health was deteriorating quickly. On January 20, 2018, I asked my fiancée to take me to the ER due to the intensity of the pain. The nurse took one look at me and said “we need to get him to the back now”. Moments later, I realized I was partially paralyzed from the waist down.

Things were so bad at this point, the ER doctors admitted my fiancée and put her in a bed beside me, thinking my journey was coming to an end. They put me on steroids, and within days I was receiving radiation treatment. Amazingly I was up and walking in just days, but it took a month for the full feeling to come back to my legs and groin.

I supposedly contracted a staph infection during the week I was in the ER fighting to save my legs.  This was discovered by a blood test, but the location of the infection was never confirmed by either a transesophageal echocardiogram or a full body MRI.  But there was no taking chances, and high dose IV antibiotics started immediately.

Just weeks before the melanoma took my life, I received my fist combination dose of the lifesaving immunotherapy Opdivo (nivolumab) + Yervoy (ipilimumab). The first couple weeks were a struggle and I felt like I was literally fighting for my life. My body could not regulate its own temperature, which fluctuated between 36.2°C and 38.8°C, and the cancer was eating a hole through my sternum which hurt so much I couldn’t sit up without being in excruciating pain. I was covered from head to toe with the itchiest rash I have ever experienced. I was very thankful to have my brother and father by my side to wake me up every 4 hours to take pain meds and Tylenol, cool me down with cold compresses when I was too hot, and yes, to empty my home-made urinal because there was no way I was making it to the bathroom.

The cancer was pretty much stopped in its tracks and the side effects became more manageable over the next few months. By June, the experience took its toll on my poor fiancée and she vanished permanently to be with her dad who was also dying of prostate cancer at the same time. I struggled physically and emotionally, trying to define my new normal. I changed my diet, started juicing, slowly reintroduced physical exercise, went to several types of therapy, read spiritual and self-help books, and started yoga and meditation. By December 2018, I was able to lace up my running shoes again.

The results of my latest PET/CT scan, on November 2, 2019, show an almost complete metabolic response; I am on the way to becoming NED (No Evidence of Disease).

I decided I needed to start running again to overcome both the physical and emotional anguish I was experiencing. I have been training almost daily, running 4 – 5 times a week, doing yoga 2-3 times a week, and working with my personal trainer. Then, one day, as I was browsing Facebook and I see this picture of my hometown friend, Shawn Bjornson, after a 5 km run in -50°C weather. His eyebrows and mustache are covered in frost and his cheeks were as red as Santa’s. So what do I do? Challenge him to a race across Lake Winnipeg of course!

True to our Viking routes, neither of us can back down from a challenge, so we have set a date of Saturday, March 7, 2020 for the 1st ever “Ice Run Across Lake Winnipeg”. The race will be approximately 30 km from Grand Beach Manitoba to Gimli, Manitoba. Weather that time of year is extremely unpredictable and if conditions are considered to be too dangerous by our team, we will elect to postpone for 1 week and attempt again on March 14, 2020.

We will be running to raise money for the Save Your Skin Foundation.

Thank you for your interest" 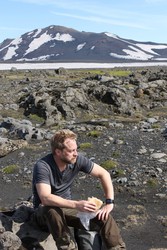