The St. Dunstan’s Basilica Parish refugee committee in Charlottetown, Prince Edward Island, Canada is in the final stages of a family reunification sponsorship of thirteen refugees from Somalia. Your tax-deductible donation to this fundraising campaign will bring stability and hope to a family that has suffered unimaginable adversity.

In 2009, the Nuur siblings witnessed the brutal execution of their father by rebel troops outside the family home in Somalia. Grief-stricken and terrified, the surviving family members fled their homeland. They travelled by foot for seven days through rural Somalia, bringing only what they could carry with them. Eventually, they arrived at the Kenyan border, where the UNHCR documented them as refugees and sent them to live at Kakuma Refugee Camp.

Kakuma Refugee Camp is located in the north-western region of Kenya. Established in 1992, the 15km² camp has a capacity of 125,000 people – as of February 2017, it housed more than 164,000 registered refugees and asylum-seekers (source: UNHCR). While the camp provided a measure of temporary stability, the family endured hardship there: they depended on food rations, and had little access to medical care. Security was an ongoing concern, especially for girls and women.

In 2009, the eldest Nuur sibling, Ubah Ali, came to Canada as a privately sponsored refugee through the First Baptist Church in Charlottetown, PEI. As she set about rebuilding her life, she could not forget the siblings she left behind at Kakuma Refugee Camp, so she appealed to Father Floyd Gallant of St. Dunstan’s Basilica Parish for help. In 2012, the St. Dunstan’s Basilica Parish refugee committee agreed to sponsor the nine remaining members of Ubah’s family to immigrate to Canada.

The refugee committee worked tirelessly to raise the necessary funds to sponsor all of the members of the Nuur family to immigrate to Canada. It took years for the sponsorship applications to be processed, and during this time, the family expanded from nine to thirteen members, through marriages and the arrival of precious little ones.

Members of the Nuur family finally began arriving in PEI in 2016. As of June 2017, the refugee committee members have joined Ubah in celebrating the arrival of ten relatives. We are now waiting for the last sibling to arrive: 27-year old Ruan, and her children: two-year old Hodan and one-year old Mohamed. When they arrive in Canada, it will mark the end of years of homelessness and separation for the Nuur family. They will be together, and safe.

We are so close to fulfilling the promise we made to Ubah five years ago, but we need your help to see this through to the end. As a sponsorship committee, our role is to support the family members financially for their first year in PEI. With the unexpected increase in the number of family members in the sponsorship group, our expenses are projected to exceed available funds within a few months. Your tax-deductible donation to this fundraising campaign will ensure we are able to meet our commitments to the Nuur family. 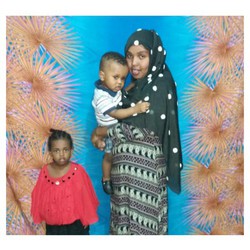