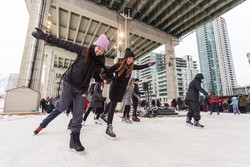 The Bentway finds hidden magic under the Gardiner Expressway, transforming this overlooked land into a new destination for arts, culture, recreation, and community.

The Bentway stitches together seven local neighbourhoods, home to over 70,000 residents living in tightly-packed vertical condos. Here, in the middle of Toronto's concrete jungle, The Bentway offers a breath of fresh air and a vital backyard park. We are a new type of public space for a growing city.

Announced in November 2015 with a principal capital donation by Judy and Wil Matthews, the first phase of The Bentway – stretching from Strachan Avenue to Bathurst Street – began construction in 2016, and was completed in 2018.

Phase 1 of The Bentway includes a variety of multi-use spaces for performances, events, and recreation. These include:

The Bentway's year-round programming is site-specific, contextual, always free, and uniquely urban; both of and about the city. Working at the intersection of art, urbanism, and recreation, we offer rotating public art exhibitions, dance & musical performances, educational workshops, creative conversations, and a variety of opportunities to play (from ice skating to skateboarding).

We are the charitable non-profit founded to develop, operate, and programme the site year-round. The Bentway is made possible through the collaboration of a range of partners including the City of Toronto, Waterfront Toronto, Judy and Wilmot Matthews, Ken Greenberg Consultants, PUBLIC WORK, and Fort York National Historic Site.

The Bentway is a proud member of The High Line Network, an international network of projects that transform underutilized infrastructure into new urban landscapes.

"[The Bentway] makes an attraction of what has long been a dead zone between two lively parts of Toronto and it provides a bit of space for breathing and play in a condo-cramped downtown... It is a modest but valuable reminder of the power of public spaces to transform a city. "

"Who would want to hang out under an expressway? Lots of Torontonians, apparently. […] There's a lesson here for Toronto: People are hungry for different kinds of public space"