“You don’t have to move mountains.  Simply fall in love with life.  Be a tornado of happiness, gratitude and acceptance.  You will change the world by just being a warm kindhearted human being.” Anita Krizzan

The intent and purpose of the Fund is to support charitable organizations with a mandate to further the inclusion and independence of persons with disabilities.

The Diane Butcher Open Door Legacy Fund honors the memory of Diane Butcher (1949-2017) who grew up in the Bentley, Alberta area and moved to Edmonton in the mid-70s as a young woman. Diane had such a engaging personality and she lived her life with a neuromuscular disorder which required her to use a power chair for mobility.

Diane Butcher was a leader in the community by advocating for persons with disabilities over through her employment and volunteer involvement, and by her day-to-day interactions with others.

At the Mayor’s Awards ceremony and reception held at City Hall May 31st, Diane was the recipient of the 2018 Ewen Nelson Self-Advocacy Award recognizing her contributions to advancing independent living for persons with disabilities for more than forty years.

Diane’s employment spanned twenty years at MacEwan University as an Instructor with both the Residential Aide and Community Enrichment Programs.  Through these programs Diane worked with students with learning disabilities to develop skills to provide homecare support to persons with physical disabilities, followed by working with adults with a broad range of physical disabilities to increase their independent living skills.  In 1996 Diane was recognized with MacEwan’s Medallion Award for Excellence in Teaching.

As Diane’s physical abilities declined over the years, her exuberance for life and mentoring/supporting others never wavered.  Diane resided at Abby Road Housing Co-operative for 25 years, and became an integral part of the management of the co-op through serving on the board of directors and a range of committees. At Abby Road, Diane had an “open door” policy where the door to her unit was open during the day where she made herself available to others by lending an ear to other’s life challenges by offering support or advice. Personally Diane was very open and she easily shared her knowledge and experience with others and endeared herself to many.

Diane frequented the Old Strathcona and Downtown Farmer’s Markets, and she was a regular concert goer of Northern Lights and New Moon Folk Clubs.  Each summer Diane  could be seen attending many of the City’s festivals including the annual Edmonton Folk Music Festival.  Diane had a love of travel of some of her trips included Japan, Greece, Caribbean and Hawaii.  Diane was an avid gardener and she had a love of cooking and baking. 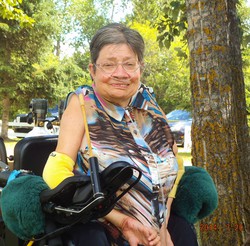