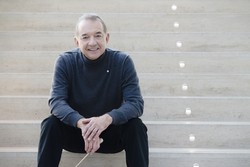 Founded in 1983 by Music Director and Conductor, Alex Pauk, Esprit’s commitment to commissioning and advancing contemporary music has set it apart as one of the few organizations of its kind on a global scale. Esprit consistently collaborates with outstanding composers, and performs with first-class soloists and ensembles from Canada and abroad.

With a dynamic annual subscription concert series, this skilled 65-member orchestra presents music that is otherwise unavailable in Canada, always performed to the highest standards in the acoustically acclaimed Koerner Hall at the TELUS Centre for Performance and Learning.

In addition to its commitment to new music, one of Esprit’s core initiatives is to cultivate the next generation of new music professionals and audiences through mentorship and outreach programs. Each year, Esprit engages with schools and organizations to provide free educational experiences including lectures, open rehearsals, and mentorship opportunities in both composition and orchestral performance. Esprit’s annual New Wave Composers Festival celebrates young Canadian artists, providing a rendezvous where young composers and performers can connect with one another and the wider musical community. Esprit has been the recipient of multiple prestigious awards, including three Lieutenant Governor’s Arts Awards, the Jean A. Chalmers National Music Award, the Vida Peene Award and the SOCAN Award for Imaginative Orchestral Programming. Esprit aims to continue this trajectory of excellence as the organization proudly undertakes its third decade of operation.

One of Esprit’s most important recent endeavours was a debut tour to China for performances at the 2015 Beijing Modern Music Festival and the China-ASEAN Music Week in Nanning where Esprit was also orchestra-in-residence. The tour coincided with the 40th anniversary of diplomatic relations between Canada and China and set the stage for developing long-lasting musical exchanges between Esprit and Chinese musical artists.

Esprit is a non-profit charitable organization governed by a volunteer Board of Directors.

"Esprit has virtuosity to burn!"

— Colin Eatock, The Globe and Mail

"One of the finest contemporary music ensembles in the world."

"Such artistic bravery on the part of Esprit deserved an award."