To ensure his legacy, at DK’s request, his sister Jennifer Kelly-Barnett has reached out to the Community Foundation to start the David ‘DK’ Kelly Memorial Bursary Fund. Donations to this fund will be held in perpetuity, never being spent. The annual income earned from the fund will be used to support one or more St. Malachy’s Memorial High School graduating students annually who are pursuing post-secondary studies in a medical-related field. Preference will be given to students who have demonstrated their community spirit through their volunteerism and/or philanthropic endeavors.

An inspirational figure in Saint John, throughout the hockey world and beyond, David ‘DK’ Kelly was a true humanitarian whose tireless efforts to promote selflessness and raise both funds and awareness for cancer were without peer in southwestern New Brunswick. DK’s incredible spirit of giving, kindness and unwaveringly positive attitude in the face of adversity are the tenants from which this special fund are based.

Diagnosed with cancer in 2014, DK fought courageously in the face of overwhelming odds and found some positive within the negative, through the establishment of #TeamDK, a movement of supporters through which several fundraising campaigns were spearheaded. When given a dire prognosis in 2016 and preparing to say goodbye to his loved ones, DK’s young nephew Jacob, dressed up in a doctor’s costume, applied a monkey Band-aid on his uncle’s “boo-boo”. Miraculously, DK’s symptoms improved, allowing him to rejuvenate to the point that he was able to return to work at Harbour Station – something doctors said would not be possible.

The story of DK’s amazing recovery and the miracle Band-aid’s involvement therein quickly became famous and #TeamDK seized upon this momentum by creating the Monkey Band-Aid Campaign, which raised over $25,000 for the Saint John Regional Hospital Foundation Oncology Department Education Fund and gave hope and inspiration to so many people facing their own challenges.

Sadly, David Kelly passed away at the age of 40 in March of 2019. The essence of #TeamDK will be embraced by Saint Johners and around the world for years and decades to come, and the legend of the Monkey Band-Aid will undoubtedly live on forever, along with DK’s spirit and the energy he devoted to the city and the people he loved so much. 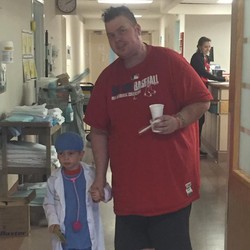