THE NATURE TRUST OF BC

Saving Grasslands in the Okanagan

With your help, The Nature Trust of BC has the opportunity to save a 1,052 hectare (2,600 acre) grassland property which is home to rare and endangered species.

Located near the community of Princeton, we are working to acquire this property in three phases. Phase II covers 390 hectares (963 acres), and features a variety of habitat including grasslands, forests, wetlands and riparian land.

Only 1% of British Columbia is covered with grasslands which provide habitat for 30% of BC’s species at risk.

Grasslands support more threatened and endangered plants and animals than any other habitat type in the province.

The property includes critical habitat for the endangered Williamson’s Sapsucker, a small woodpecker with a yellow breast and red throat. It is estimated that less than 500 adult birds live in Canada. Sapsuckers get their name from drilling rows of shallow holes in tree bark and licking the sap that flows from these holes. Later the birds return to eat inset that become caught in the sticky residue.

There are many species of birds in these grasslands such as the Barn Swallow, Olive sided Flycatchers and Western Screech Owl.

Mule Deer range on the property in the winter. Mule Deer have difficulty in the deep snow and move down from the higher elevations during winter to feed on the leaves, twigs and shrubs of the low lying grasslands.

Each of these species depend on multiple kinds of habitats to live healthy lives and contribute to the ecosystem.

Please help The Nature Trust of BC acquire Princeton Grasslands Phase II with a gift of support. We are delighted to have the support of MapleCross who have committed to match donations up to $650,000. This is an outstanding opportunity to double the value of your gift and do twice as much for land conservation in BC. 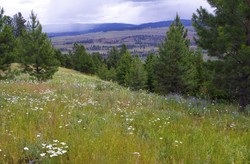