THE PARISH OF MANOTICK, (ST JAMES) 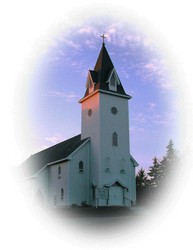 Saint James’ is a lively and vital part of the village of Manotick and the areas surrounding it, dedicated to bringing the healing and joyful message of Christ to the community.  We welcome you to worship and hope that you will join in our activities.  If you live in this area, or visit here, we look forward to having you with us!

We’ve been in the village since its early days. In 1873 the Reverend Anthony O’Loughlin, Priest of the Parish of North Gower in the Diocese of Ontario, was meeting with his “unshepherded flock from the north” on Sunday afternoons in the First Line schoolhouse four miles north of Kars. On 31 July 1875 Moss Kent Dickinson conveyed a lot on the north side of Bridge Street to the Diocese. The new congregation held its first Vestry meeting on 8 May 1876, and a building committee (which included Mr. Dickinson) was immediately struck. No time was wasted; following a second Vestry meeting on 16 May, architectural plans for the new church were drawn up. Tenders closed on 27 June, and a bid of $1,047 was accepted from William Beaman, the son of one of the first three lumbermen in North Gower Township. The contractor received his final payment in 1877, at which time there appears to have been no outstanding debt for the new parish church of Saint James the Apostle.

On 22 February 1877 the Ottawa Free Press stated that “The new Anglican Church in Manotick was opened for public worship on Sunday last. The edifice is beautifully situated near the village, of gothic style, with open roof, chancel, vestry and porch, painted without and oiled and varnished within, and contains about 200 sittings. It is an ornament to that romantic little village, and a credit to the builders, and the incumbent, the Rev. Mr. O’Loughlin.”

Changes and developments continued over the years. The first organ was acquired in 1879, and the choir was established in 1886. In that year as well the Parish of North Gower was divided, and the new three-point parish of Manotick came into being. The new rector, Rev. J. F. Gorman, resided in Manotick and had charge of Saint John’s, Kars , and Saint Paul’s, Osgoode, and well as Saint James’. Sunday School organization began in 1890; 1894 saw the formation of the Ladies’ Guild. Saint James’ became part of the new Diocese of Ottawa in 1896. Over the next 15 years additional land was bought adjacent to the church, an enlargement was completed and a bell tower constructed.

The words inscribed on the church bell (which still peals for worship) are taken from the hymn ‘When Morning Gilds the Skies’  [Hymn 2 of the ‘Common Praise’ hymn book]:

Electric lights were first turned on in 1926. A full basement was finally completed in 1945.  During World War II 15 young men from the parish enlisted. Those who survived returned to the beginning of a new era. The postwar influx to the parish began, and the 75th anniversary was celebrated in 1951 with 62 families and a total membership of 216 on the rolls. The Diocese of Ottawa was planning to construct 15 new churches. The three-point parish of Manotick, Kars and Osgoode was divided in 1957, and Manotick was made a separate parish under the leadership of Reverend T. E. Downey, for whom a new rectory was built across the Rideau River from Watson’s Mill.

Renovations were carried out on both the church and rectory during the ‘sixties as the parish continued to grow. By 1976, our one hundredth anniversary, there were 180 families on the rolls. A special Centennial Service was held on Whitsunday, 6 June, with the Bishop of Ottawa, Rt. Reverend W. J. Robinson, as the honoured guest.

The original Saint James’ church building had served its predominantly rural congregation well, but as the 1980’s arrived it became apparent that the existing structure was not adequate for the needs of the parish. Its fabric was in relatively poor condition and it was difficult to heat in winter. With a growing local population to serve, Vestry decided in 1984 that a new and larger church should be built on the same site.  A great deal of finishing work for the new church was done by members of the congregation, and as many as possible of the old interior furnishings were incorporated into the new building. The renewed St. James’ Church was dedicated in 1985 and was consecrated by the Bishop of Ottawa in 1993.  In 1998 an addition was built to provide an elevator for handicapped access, as well as new office space and meeting rooms. A visitor to the church now will thus see a traditional but recently built structure, most of whose plaques and stained glass windows hearken back to an earlier age.  If you want to see more, take our virtual tour.

Our vision is to witness as ‘a Christian Community Joyfully Serving and Growing in God’s Love’. We hope you’ll visit, and then join us as a member of our parish family!