The award honours long-time collaborator Patrick Conner and seeks to carve a space for us to acknowledge the costs of integrity, honesty, generosity and belief. The Award is given annually to two extraordinary individuals who inhabit either of the two worlds that were essential to Patrick ~ theatre and sustainability. This annual award honours two individuals with a cash prize.

Patrick Conner (1964-2012) was born in Kingston, attended Queen's University and was a graduate of George Brown Theatre School.  Patrick was a lauded Actor, Director, Dramaturg and Teacher and in later years he also embraced the world of organics as a Member/ co-owner of The Big Carrot Natural Food Market, serving on several committees including the Board of Directors, the Non-GMO Project, and serving on the Danforth BIA.

Patrick devoted his life to the theatre. He was a lauded Actor, Director and Dramaturg (Ken McDougall Award, Dora Award nominee and wins), who spent the balance of his professional years working in Toronto Theatre. Patrick was a co-founder of Die In Debt Theatre (A ground breaking site responsive theatre company) A key collaborator with Theatre Rusticle and a constant contributor to the works of VideoCabaret, Buddies In Bad Times Theatre, Threshold Theatre plus countless other Toronto companies and the Theatre Community at large. 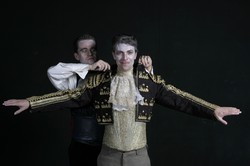