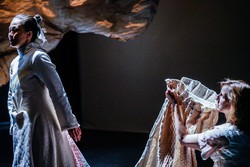 TomoeArts is a dance theatre company that works between traditions and disciplines. We promote, teach and perform Japanese classical dance. We create and present interdisciplinary performances that incorporate traditional Japanese forms and aesthetics. We are a resource for information on these performance forms, and bring together community, academic and professional worlds.

We have ongoing performance and educational programs, and produce or create at least one major project a year.  These projects alternate between traditional performance and newly created interdiscuplinary dance-theatre.

Some of our major projects:

- Odori: The World of Kabuki Dance - a concert of kabuki dance featuring master dancers and costumers from Japan

Some of our ongoing programs include:

- Yûko-Kai - and annual presentation of traditional and innovative nihon buyoh

Tomoe means whorl or vortex.  Tomoe is also the name of a female general from 12th Century Japan.

"A visual and aural extravaganza."

""...from complex and serious with a touch of magic and ritual, to the mundane and relatable, the comic, the human." "

""I was literally floored by the performances." "