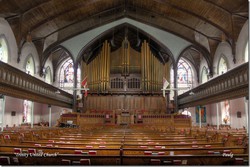 We, the Trinity-Clifton Christian family, believe that God has blessed us with diversity, including diversity in sexual orientation, gender, gender identity, race, age, ability and faith. We believe that Jesus challenged boundaries by reaching out to all people, welcoming and honouring all in their uniqueness.
We publicly declare our commitment to openness, growth, action, and education, honouring diversity and challenging injustice in solidarity with those who experience discrimination.
We offer our resources and talents with open hands and hearts in love and service to all as we work for reconciliation and justice locally, regionally, and globally.
As an Affirming Ministry of the United Church of Canada, Trinity-Clifton is committed to broadening social justice concerns within church and society.
The United Church of Canada has stated:
"In order to promote mutual respect, peace, and friendship,
the 40th General Council encouraged the recognition of Traditional Territories of First Nations, Metis and Inuit peoples at the gatherings of the Courts and Pastoral Charges of the United Church of Canada."
All are welcome.
Website: http://trinityclifton.org/
Facebook: https://www.facebook.com/TrinityUnitedCharlottetown/
Youtube: https://www.youtube.com/channel/UCvAOULHuPNKxBA-tjiKF6Ug

Trinity United Church is located on lower Prince Street, Charlottetown. The roots of Trinity date to 1778 when Benjamin Chappell, an early postmaster of Charlottetown and a personal friend of John Wesley, invited a number of friends into his home for worship. A replica of his tiny house is displayed at Trinity.

The present sanctuary structure, which seats up to 1000 people, was opened and dedicated for public worship in November of 1864 and is the oldest Charlottetown church building in continuous use as a place of worship. Following church union in 1925, this formerly Methodist congregation became part of the United Church of Canada. The congregation takes immense pride in its historic building, along with the adjacent Manse (both included in the registry of Historic Charlottetown Buildings) and the more modern Christian Education Centre. In particular, the church is well-known for its numerous stained glass windows and impressive Casavant Frères organ, and is a popular venue for concerts and other performances.

Trinity-Clifton Pastoral Charge recently received the Organization Appreciation Award from the PEI Association of Newcomers to Canada for its consistent commitment to assisting newcomers to PEI. Trinity-Clifton serves the surrounding community in numerous ways such as the Prince Street School Breakfast Program.

As an Affirming Ministry of the United Church of Canada, Trinity-Clifton Pastoral Charge is one that specifically declares itself to be fully inclusive of all people, regardless of ability, age, ethnicity, gender, gender identity, race, or sexual orientation. Affirming ministries promote awareness and understanding, and work to end discrimination, alienation, and ignorance. They are explicitly welcoming around issues of sexuality and gender and are fully supportive of people of all sexual orientations and gender identity.