When the Syrian Civil War broke out in 2011 citizens were forced to run for their lives as their country crumbled around them. Many Syrian families were able to escape to Canada and other countries, but some have been living in refugee camps for years on end.

One family who escaped and then settled in Canada was the Alhawari family – they arrived in Fredericton, New Brunswick in 2016. Abdulmanim, his wife, and three children, have integrated into our welcoming, multicultural community. The kids enjoy their time at school and have developed amazing English skills, and Ab is now a cook at a Lebanese restaurant downtown.

In 2018 we learned more about family left behind. Ab has a sister who has been living in a refugee camp in Jordan for three years. Iman, her husband and their four children are in the Azraq Refugee Camp in Jordan. They live in a corrugated tin shelter with no water and infrequent electricity. They are unable to return to Syria – their deepest hope is to join their family here in Fredericton.

In late 2018, with the guidance of friends at Wilmot United Church, we began the private sponsorship application process to bring the Abd Alaziz family to Fredericton and reunite them with their family here. The detailed application process was underway throughout 2019. In February 2020 the family was interviewed by Canadian officials in Jordan. Next will be medical and security reviews, and if all goes well, they could arrive here in a couple months’ time.

As part of the private sponsorship process we must raise funds to cover the family’s living expenses for one year. We are raising money for rent, utilities, food, medical expenses, and clothing. Through various channels, including crowd funding, direct appeals and Wilmot’s Canada Helps page, we are aiming to raise $45,000.

We are grateful to Wilmot United Church and other partners in Fredericton for their help. Any donation you can make will help to reunite this family and change their lives forever. 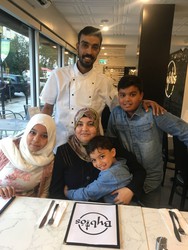