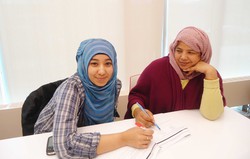 One afternoon, two youth living in Regent Park met in a Tim Hortons to bounce around an idea. One had taken notice of his brother teaching his mother English language skills. He was shocked by how patient and clear his brother was, and equally important, how quickly his mother was picking up the language. It wasn’t as though she hadn’t tried before; like so many newcomer adults, she attended local English as a Second Language programs but often felt lost because of the quick delivery of concepts, the facilitators’ inability to speak their students’ native languages, and the cultural gap. But in the safety of their homes, these same adults prospered, quickly picking up concepts from their children.

With this in mind, those two youth galvanized other young people in the area and, in less than two weeks, independently developed a curriculum, secured a local program space, enlisted countless participants, and launched a program called Youth Empowering Parents (YEP).

Since then, the program has flourished. It has grown to over 80 locations across 5 countries, impacting thousands of people. Young people, ages 9 and up, volunteer to teach English, technology, musical instruments, financial literacy, health and physical activity, environmental skills, and many other day-to-day life skills. “At-risk youth” have collectively delivered over $3 million in private tutoring value, whilst simultaneously improving their communication, leadership, empathy, and professional skills.

YEP has been recognized by several media outlets across the world, and has received distinguished awards, including an innovation award from the United Nations (personally delivered by Secretary General Ban Ki-moon).

YEP supports local grassroots organizations who are working to improve the lives Black and Indigenous persons. You can also make a donation directly to support either of these grassroots initiatives.

little sister (also known as lil sis) is an artist platform for QTBIPOC + BIPOC youth (Queer, Trans+, Black, Indigenous, People of Colour) and works to provide a range of supports aimed at building sustainable and gainful career paths in the arts and entertainment industries. This platform provides professional guidance and mentorship through monthly open mics in Toronto's Regent Park neighbourhood, as well as educational workshops ranging from financial literacy in the arts to dealing with microaggressions in the entertainment industry. little sister is a peer and youth led grassroots group. In 2018, little sister conducted research on QTBIPOC youth artists in Toronto (to be released in 2020).

Parents of Black Children (PoBC) is an advocacy group formed to support and address issues related to the success of Black students within schools. The group started as a collective of parents from York Region, but offers support and advice to families across the province. We are working to ensure that our Black children can meet their full potential and achieve success in their educational outcomes. Their United Parents (UP) initiative supports Black families as they navigate the education system.

"I came to Youth Empowering Parents because I like helping people… It’s the same as helping my own parents. "

"Youth Empowering Parents lets marginalized kids feel they have something to offer. They carry a lot of knowledge with them, and can teach their unique skills to the community. We’re seeing kids with improved outcomes in their academics, with greater confidence, and with better communication skills."

"This program is based on a pattern in many immigrant households: children teaching their parents English and computer skills. Youth Empowering Parents is an innovative approach to improving outcomes for newcomers and building leadership skills in youth." 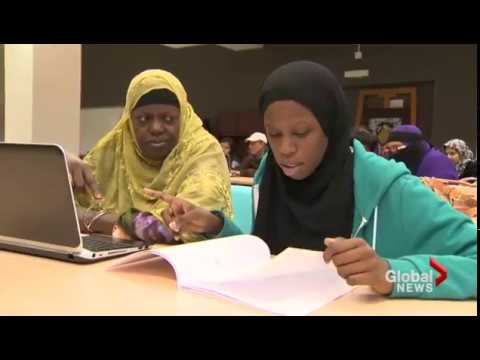