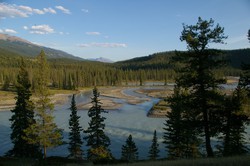 For more than 50 years we have worked throughout Alberta to secure a network of protected landscapes and the conservation of wilderness.

Around a kitchen table at a home near Pincher Creek, a group of concerned friends gathered and the conversation brought them to the last backpacking trip they were on, the day they were out looking through their scope for Bighorn sheep and the changes they were seeing on the landscape.  The changes that were affecting wildlife, the quiet they once knew, the dust in the air, the growing logging and oil and gas activity and the changes in how they could enjoy the wilderness they had always known.  Feisty and part of the 60â€™s revolution, this group of formidable people with the vision to realize something must be done to protect wild spaces sought the help of government and other organizations that they thought would be concerned too.  In the end, they were the ones who would advocate and speak up for wildlife and wilderness and they formed the Alberta Wilderness Association.  More than 50 years later, almost certainly they had no idea their concerns would be felt as strongly today as it was in the beginning.

Alberta Wilderness Association works throughout Alberta, and it is an especially crucial time now for a number of wilderness areas and wildlife. In some cases it is time to let nature take its course and help restore vital headwater security and habitat for threatened and endangered species like native trout, grizzly bears, caribou and truly rare plants and trees.

That the vision and determination the founding members of Alberta Wilderness Association had has helped so many become aware and speak up for wildlife and wilderness is a priceless legacy; one well beyond their imaginings. Today with more than 7000 members and supporters, we are dependent on the vision and determination of people throughout the province to help us be strong and to make a difference in the legacy we will leave generations to come.

In 2019 AWA was evaluated and received 4 stars and an A rating from CharityIntelligence.ca - a ranking we are proud to share as we work to ensure we are achieving our work and doing it with transparency in all areas including finances.