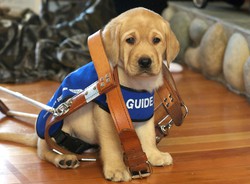 BC & Alberta Guide Dogs is a registered charity. Our mission is to meet the growing demand for professionally trained Guide Dogs for people who are blind/visually impaired, Autism Support Dogs for children with profound autism, and PTSD Service Dogs for Veterans with PTSD – at all times meeting or exceeding international standards as established by the International Guide Dog Federation and Assistance Dogs International.

About BC & Alberta Guide Dogs

BC & Alberta Guide Dogs breeds, raises and professionally trains Guide Dogs for individuals who are blind/visually-impaired, Autism Support Dogs for children with profound autism aged 3-10 and PTSD Service Dogs for Veterans with PTSD. It takes two years and upwards of $35,000 to produce one certified dog, provided free of charge to the recipient.

The organization was founded in 1996 as BC Guide Dog Services and began professionally training Guide Dogs for blind/visually-impaired British Columbians, becoming fully accredited members of the International Guide Dog Federation in 2001.

In 2002, the organization expanded into Alberta, and in 2008 launched its sister charity, Autism Support Dogs in partnership with the Victor and Anna Kern Foundation, the Vandekerkhove Family Foundation, the Diamond Foundation, and Variety–The Children’s Charity.

At the end of 2018, Vancouver Island Compassion Dogs (VICD) officially amalgamated with BC & Alberta Guide Dogs, which strengthens the capacity of both organizations to bring more service and support dog teams to the PTSD Service Dog program.

Our Board of Directors, staff, and volunteers are dedicated to improving the availability of service of Guide Dogs, Autism Support Dogs and PTSD Service Dogs; including breeding, raising and training more dogs and continuing to give care to dogs that are currently with human partners.