This article written by CanadaHelps was originally published on Hilborn. 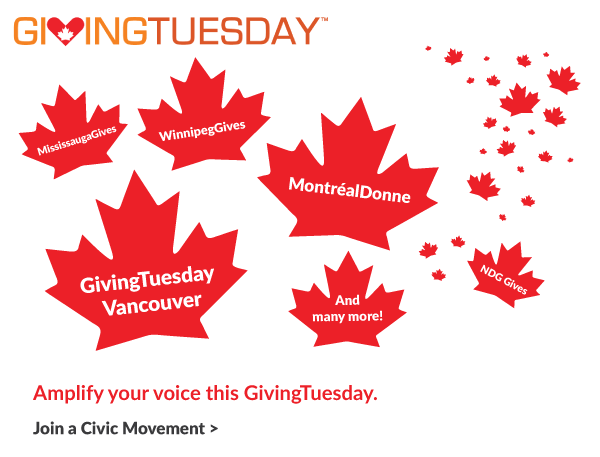 GivingTuesday marks the opening day of the holiday giving season. Occurring annually on the Tuesday after Black Friday and Cyber Monday, the movement encourages individuals and organizations to join together to find innovative ways to give back to the charities and non-profits they care about. This year, Tuesday, December 1st, 2015 will serve as a focal point in our collective efforts to make a stronger and more caring Canada.

GivingTuesday is a powerful movement with proven traction to inspire Canadians to get involved. CanadaHelps donation data from previous GivingTuesday demonstrate that participating charities see the greatest results. In 2014, GivingTuesday increased charitable donations in Canada by 75% on top of the 169% lift we saw in 2013. Charities that actively promoted GivingTuesday saw the greatest lift in donations, with an average overall increase of 93% in number of donations received through CanadaHelps. It is clear that GivingTuesday resonates with, and inspires Canadians.

How your organization can participate

There are numerous ways your charity can participate in GivingTuesday Canada this year. The first step is to become an official partner in the movement. You can easily do this online through the GivingTuesday website. It’s free to become a partner and only takes a few minutes! Whether your charity or non-profit decides to develop a campaign to grow awareness of your charity and its charitable mission, raise funds for a specific project, work to recruit new volunteers, or simply use it as an opportunity to thank your supporters, be sure to join the GivingTuesday conversation. Gain visibility for your charity and amplify the movement by using #GivingTuesdayCA in your social communications and conversations.

Connect with your community: Join a civic movement

In 2014, there was a groundswell of GivingTuesday activity organized by local civic groups in cities all across the country. Halifax, Ottawa, Guelph, Sarnia, Regina and Calgary are just a few examples; and many more cities have committed to Civic Movements for 2015. These civic movement and groups create opportunity for a deeper level of engagement between charities, business and local residents.

Civic Movements for GivingTuesday are about strengthening communities. The specific places where people live, where they have the most personal connections, and where they are most directly impacted by the work that charities do in their local communities. We encourage you to enhance your organization’s GivingTuesday experience (and results) by joining a Civic Movement in your community. While you may still run your own campaign or initiative, being part of a Civic Movement adds a common fundraising goal, initiates collective social media conversation and even possibly events (i.e Charity Fairs) that will pull your community together and strengthen it as a whole, while providing additional exposure for your charity.

With less than one month to go until GivingTuesday, which takes place this year on December 1st, we encourage you to join or start a Civic Movement in your community. It will help amplify your GivingTuesday campaign, and will allow your charity to connect with local residents, businesses, and other charities in a more personal way. Visit GivingTuesday.ca to find and join a Civic Movement near you.

Can’t find a Civic Movement in your area? Learn more about leading one by contacting the GivingTuesday team at info[@]givingtuesday.ca.