Charity Spotlight: This blog post is part of our charity spotlight series and was provided by Emily Vandermeer, Communications Specialist at the World Wildlife Fund Canada (WWF).

We only have one Earth. A planet that we all – animals, plants and people – share and depend upon. Earth Day is a chance to reflect on how you can become a better steward of your amazing planet. That’s no small thing because we’re entering unknown territory.

We have lost, on average, 58 per cent of the wildlife populations on this planet since 1970, according to the latest Living Planet Report from the World Wildlife Fund and the Zoological Society of London.

And unless we act quickly, we risk losing more than 67 per cent of wildlife by 2020. That’s two-thirds gone in just one human lifetime. 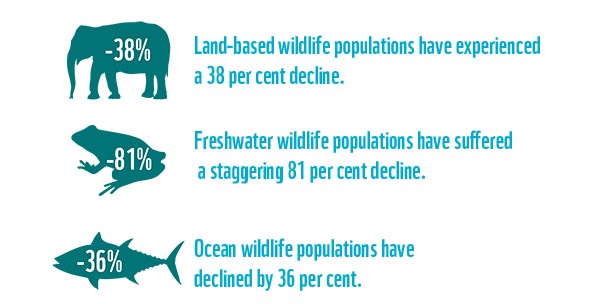 Humanity now consumes the renewable resources of 1.6 Earths each year. Habitat loss and fragmentation, climate change, overfishing and pollution have put unimaginable pressures on the wildlife and nature you value.

Since its founding 50 years ago this year, WWF-Canada has been working to reverse the decline of wildlife across Canada and around the world. Canadians have helped protect, conserve and sustainably manage more than 1 million sq. km of our country.

With support from thousands of people like you, more than 770 species-recovery projects have helped improve the sustainability of more than 30 species. In 2005, Canadians helped establish the world’s largest freshwater reserve on the world’s largest lake, Lake Superior. And since 2016, for the first time in a century, global tiger populations are on the rise.

Because of Canadians like you, sea otters swim free in Haida Gwaii in British Columbia. Grizzlies and wolves roam huge swathes of wilderness in the Rockies. Burrowing owls and prairie falcons flutter and zip over our native grasslands. Beluga whales dip and dive in the St. Lawrence. Northern cod are coming back off Atlantic Canada. And polar bears, narwhals and bowheads glide through protected icy expanses in the Arctic.

Protecting Wildlife 50 Years and Beyond

These conservation successes reflect a coming together of all Canadians, unified by a commitment to be good stewards by protecting Canada’s global gift of nature.
But the results of the Living Planet Report show us that our job is not yet done.
Right now, WWF-Canada is working to add the Arctic’s Lancaster Sound to the list of protected spaces in 2017 and help Canada reach its goal of protecting 10 per cent of its oceans by 2020. We’re also working to create protections for threatened barren-ground caribou and reduce threats to endangered Salish Sea orcas.

This Earth Day, let’s all take action to reverse the decline of wildlife and protect wild places so that our children inherit a healthy planet. Today. For the next 50 years. And beyond.

To learn more about the World Wildlife Fund Canada (WWF), or to make a donation, please visit their Charity Profile Page.

0 Responses to “Conserving Wildlife and Our Planet, 50 Years and Beyond”