Dusty Rhoades is a US-based Harley Davidson mechanic, former college football player, and at first-glance, might seem like an intimidating guy. But he’s also a Brony – “Bros who like ponies.” Bronies are hard-core fans (usually adult males) inspired by the Canadian-produced hit television show “My Little Pony: Friendship is Magic”. Through his website, and later his web talk show, Dusty has raised more than $45,000 – $8000 of which has gone to Canadian charities. A bit tongue-in-cheek, but also incredibly sincere, Dusty and his online community of bronies have shown that there is nothing manlier than making the world a better place. This is Dusty’s giving story. 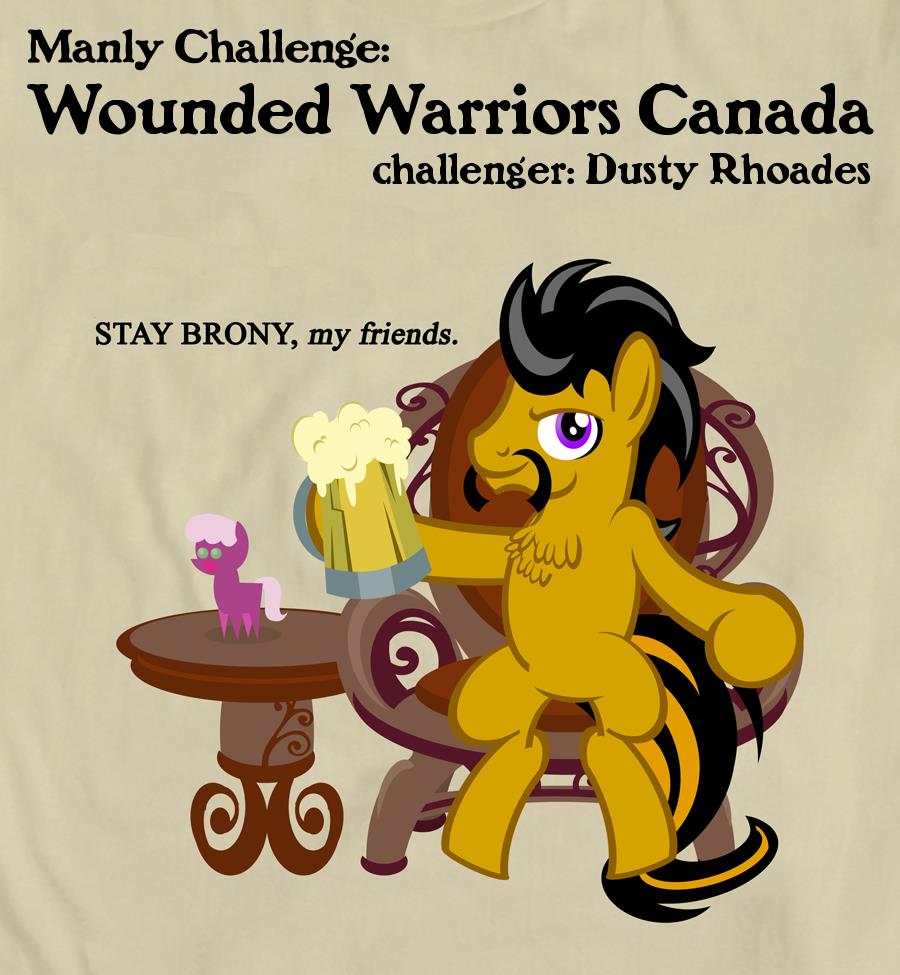 CH: In each of your webcasts, your guests choose a charity to support. You then challenge your viewers to donate to the guest’s cause. This is such an inspiring idea, and a great use of your platform. How did this start?

DR: It all started when my Livestream show, “Stay Brony, My Friends”, started to become more popular. I was involved with charity auctions at various brony conventions as an auctioneer and wanted to see how I could encourage my viewers to help others. My friend and second in command on the site/webcast, who goes by the online handle Caerdwyn, helped me get things going.

Our guests, either people participating in the production of My Little Pony or high-profile fans who work to build the community, come to the show to reach out to their fellow bronies. They’re enthusiastic, good-hearted, kind people, and they want to do good works. And when you have an audience, you have the ability to help others.

Each guest picks their own charity when they come on the program. The choice is very personal: for instance, Lee Tockar, one of the voice actors on My Little Pony, picked a vision research charity as he is almost blind; Brenda Crichlow, another voice actor, picked the YWCA of Vancouver as she has worked with them before. To encourage people and stretch their reach, for each challenge, Caerdwyn matches donations, one-for-five. If we break $500 then he kicks in $100 on top of it! To try to get each fundraiser to the $500 mark, I will give away My Little Pony merchandise, rare MLP items, or autographs from the guest as thank-you incentives.

CH: You’re American. How did you end up using CanadaHelps and supporting Canadian charities?

DR: The show, My Little Pony, is made in Vancouver, Canada by some really amazing people — voice actors, animators, writers and more. When I get a guest from Canada they tend to want to support a Canadian charity.

We found that CanadaHelps is the perfect place for our needs because it has most if not all of the charities that my guests have picked, makes it incredibly easy to donate and to fundraise, and we never have to handle others’ money. Not having to worry about that side of things makes doing these “flash charity drives” super simple.

I also grew up in Michigan, close enough to Ontario to be able to swim there if I wanted; I have a soft spot for Canada. I love my northern neighbors!

CH: Why are you so committed to giving, and encouraging it in others? What are the most important causes to you personally?

By getting the viewers of my show to learn the joy of giving, of helping others, I hope to help them to develop a lifetime habit of charity. We keep our goals modest, asking only for a few dollars per person, to keep it within reach of college-age students that make up the bulk of the brony community. And we’ve found it’s contagious! Some of our viewers and guests have gone on to start their own fundraising methods. Nothing makes me happier than to see that.

The most important cause to me is the Wounded Warrior Project. A lot of my family has been military, I have friends in the military and people coming back from war need our help. Both physically and mentally, it’s time we started helping them. They have done their duty to us, and now we have a duty to them. 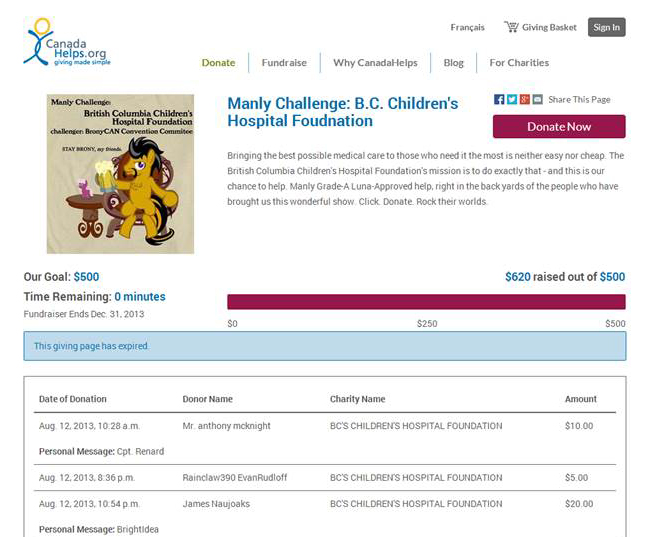 CH: On your site you say “One of the defining characteristics of bronies is their charity activism. Bronies are among the most generous people you will find on the Internet, and wherever the herd sets its hoof, support for good causes follows.” Is there something in particular in Brony culture that breeds this? Is it about the show, or about the community around the show?

DR: It’s the lessons of the show. The lessons that were common sense not so long ago, but which are not being taught well in the Internet age. “Be kind, be generous, stand up for yourself, stand up for those who can’t stand up for themselves.” Everything in this show reinforces the core message “you can count on your friends, and they can count on you”. It’s even in the title of the show: “Friendship is Magic”. What we have is a show with an identifiable moral center, that delivers the message without being lecturing or condescending or stupid. The show started it, but the community has magnified it in how we conduct ourselves and what we do. It’s taken on a life of its own, and even the show’s creators have commented on my broadcasts that they are as surprised and elated about it as me.

I am proud to call myself a Brony no matter what some on the internet or society may think of me. I know what I do, I know who I am, and I don’t need society to tell me what I can and can’t like. And if I want to like a cartoon that was made to sell toys to kids, but became more than that, I don’t see the problem. Especially when that show inspires so many people to do good with their lives.

CH: “There’s nothing more studly, more two-fisted brawny, more macho than helping others.” From your website name, to the description of the challenges, you’ve deliberately called out manliness. Can you tell me more about this positioning?

DR: Though the title of “Manliest Brony” started as a bit of a joke, it’s also sincere. I model my actions on others around me. To my father, my grandfathers, and my great grandfathers, helping others was not something you thought about doing, it was something you did because it was the right thing to do.

I also wanted to fight the idea that “manly men” were egotistical, shallow gym-rats. To me, “manliness” is having the courage to do the right thing even if people criticize you for it. It’s having the courage to be kind whenever you can, to be generous rather than selfish, and to stand tall against any who tell you otherwise. If a biker can be gentle and care about people, but still be strong and direct, why can’t others?

My father set my example. My father bought boxes of baseballs for my hometown little league when the league was broke. He didn’t have to do that – he could have just bought me and my brothers all a baseball and left it at that, but that wasn’t the kind of man that he was. We didn’t have a lot when we were young. Both my parents worked, had three kids and barely made it. But he felt enough about helping others to go buy a bunch of kids baseballs so they could go on with the league. I will never forget that. Sometimes you find your inspiration in modest actions, and it lasts a lifetime.

Ready to start your own Charity Fundraiser? Get started now »

One Response to “Fundraising for Charity: A Manly Pursuit”