When Jerry Stamp, a singer-songwriter from St. John’s Newfoundland was faced with heart wrenching news, he used his musical talents to rally his community to help a sick little girl and her family.  This is Jerry’s giving story. 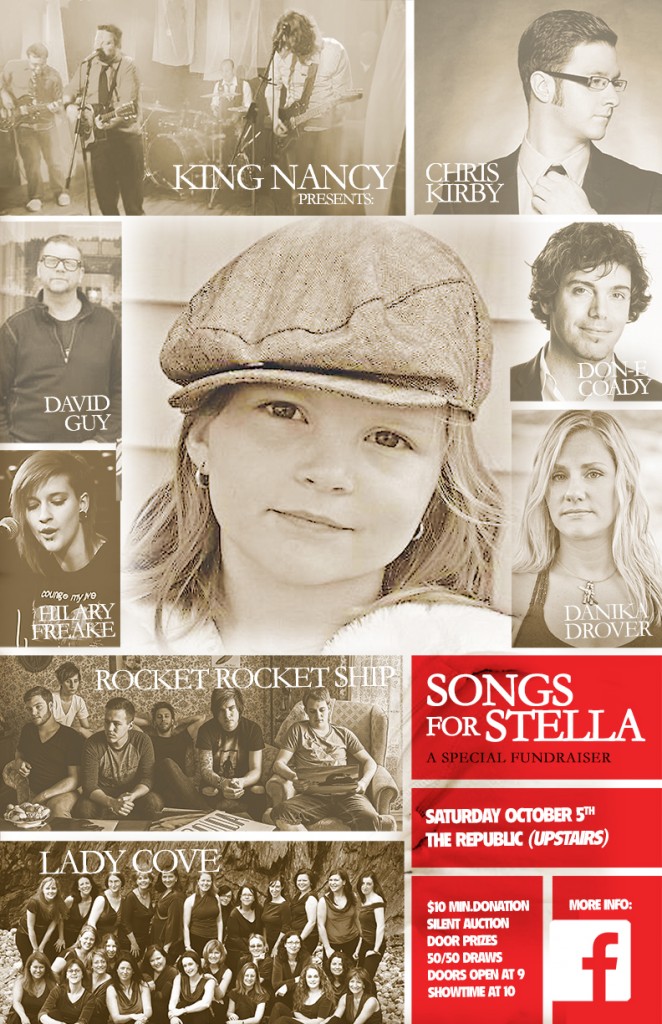 I grew up in a loving family that always contributed to as many charities as we could. My parents were always involved in school, church, and community groups so it wasn’t a huge surprise that, as a musician, I was often asked to perform benefit concerts for causes spanning from AIDS benefits to cancer research fundraisers and everything in between. There probably isn’t a major charity in the country I haven’t performed for at least once. From soft seat theatres in support of women’s shelters, to telethons or singing on charity singles for the Janeway Children’s Hospital.  I even did a set at a local concert hall for African debt relief and recently I performed at a Timeraiser event, a new (to me) method of fundraising which involves volunteer-based organizations auctioning off art for volunteer time instead of money.

Last year, I played a benefit concert in support of my friend Paul’s non-profit organization, and debuted a song which I explained is a metaphor for some health issues I have been experiencing affecting my hands, and the fear that I may eventually lose the ability to perform. Paul later told me his six year old daughter, Stella, cried during my performance because she thought the song was beautiful and felt for me. I already had such love for Stella, but her compassion at such a young age made me weak.

Months later, doctors discovered a tumour on Stella’s brainstem and airlifted her to a hospital on the east coast of Newfoundland in St. John’s.  No one knew how long Stella and her family would be in St. John’s, far from their home on the west coast in Corner Brook. I felt I had to help in any way I could.

My band, King Nancy, only plays once or twice a year whenever we are all in the same city. As fate would have it, we were all going to be in St. John’s in late September, and we unanimously decided that we would perform one of our rare shows and turn it into a fundraiser for Stella.  It was time consuming, a lot of work, exhausting, and at times hard to keep straight, but I was committed to my goal of raising $5000.00 for Paul and his family.  I was going to make sure they had as little to deal with financially, even for just a few months.

I contacted everyone I knew who worked in media, retail, hotels, and the restaurant industry. Once I had exhausted my list, I started making cold calls asking for silent auction donations.  When folks in the community heard about what was going on, they asked how they could help.  Simply through email, social media, and personal connections, we made our event, Songs for Stella, a big deal.

After four weeks of planning, our one-band show had five musical acts, a team of volunteers, a venue, and 140 auction items donated by companies and individuals ready for bidders. We were ready to hit the stage.  Although I was completely stressed out throughout the entire planning process, what kept me going was knowing that a little girl needed people like me to step up and help in any way we could. I helped in one way, other folks helped in theirs.

I was, and still am, floored by the amazing response. It even spawned others to take up the call on the west coast of the island and host their own Songs for Stella events. We had people who weren’t even coming to the show send money for Stella.  In the end, our event doubled my original target and raised $10,000.

Nine months later, Stella and family are still dealing with the ups and downs of battling cancer while living far from home.  There have been obstacles, but Stella fights on.

Volunteerism, the new currency? Read about the life cycle of a piece of Timeraiser art.
Looking for more stories of Canadians giving their time to worth causes? Read other giving stories here..

One Response to “Songs for Stella: A Community Rallies to Help a Girl with Cancer”