This blog post was written by Afrique au Féminin (AAF) 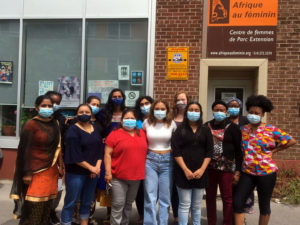 Afrique au Féminin (AAF) is a community organization located in the Parc-Extension district of Montreal. Our mission is to support immigrant women in improving their living conditions and facilitate their integration into Quebec’s society.

The Center supports the fight against poverty, social exclusion, and the lack of basic information for low-income families and individuals regarding their fundamental economic and social rights. We offer a variety of services to best accommodate the varied and growing needs of the members of our community. Our aim is to address what’s going on in the present while keeping a sustainable future in mind.

To this end, we have a weekly food bank, a daycare service that is available 7 days a week, a variety of educational programs to help women ameliorate their French language skills financial literacy, and computer use, and finally, a collection of social programs that help create a sense of community and fight against the social isolation immigration can bring. We work diligently and with compassion to identify needs during interventions and community conversations, in order to develop new and innovative activities that promote women’s autonomy and allow for long-term improvements to their situations with a nuanced and intersectional lens.

You may be thinking “great, but why the focus on immigrant women?” By understanding the demographic makeup of our Canadian population,  specifically for a city like Montreal and looking at the exclusionary frameworks and systems that exist makes it clear that the work at Afrique au Feminin, and other organizations aimed to help immigrant women, is so important and worthwhile.

Our last census in 2016 told us that 21.9% of our population is made up of recent immigrants and permanent residents. That number is the second-highest since 1921 and about 1/5th of the population and growing. Within that 21.9%, about 61.8% were reported from countries in Asia, followed by 13.4% coming from countries in Africa, which in recent years has jumped ahead of Europe as the second-highest continent for recent immigrants to Canada. So, about 1/5th of our overall population are immigrants, close to 3/4th of which are predominantly non-English and non-French speaking, who are all immigrating to the same three major cities with Canada; Toronto, Vancouver, and Montreal.

Montreal, and Quebec in general, is especially attractive to those immigrating from other French colonized countries as there is an illusion of language being less of a barrier. While for some that may be true, to leave it at that would ignore many of the added challenges and barriers one often experiences when relocating to a new country- namely, socio-political barriers like sexism, racism, and xenophobia. While it may be true that these oppressive ideologies can be found across Canada, the Quebecois immigration process and many of its cultural and political issues add unique challenges. 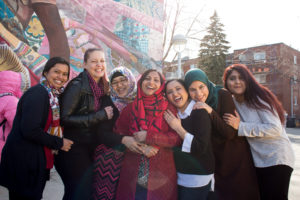 When we take a look at employment statistics for immigrant versus non-immigrant women in Montreal, there’s a discrepancy of 14-24% depending on factors like level of education, whether they have children and if so, how many. Taking that information and looking at the demographics of the Parc-Extension neighbourhood, we can see that this neighbourhood is home to some of our most marginalized and vulnerable community members.

According to a study done by Centraide in 2020, Parc-Extension is home to 28,775 people, making it the neighbourhood with the highest population density in the greater Montreal area, exceeding the city’s average four times over. It is also on record as the neighbourhood with the highest number of families with multiple children, and the highest number of visible minorities. Over 90% of its population are immigrants or have one or more immigrant parents, and over 69% of the population do not speak French or English as their first language. All together, these statistics paint a picture of a bustling, culturally, racially, and economically diverse area with many assets as well as many needs.

Quebec’s recent legislation surrounding language and religious symbols has created distress and complications for newcomers. It’s no secret that recent immigrants make up the highest percentage of unemployment in the workforce; it takes an average of 5 years before many find a secure posting. Certainly part of that number has to do with the age of the people immigrating and how much education they’ve received. However, there’s no doubt that a major issue comes from language barriers and the mixture of racism and xenophobia in Quebec’s social policies that are targeted towards people of colour who participate in the non-Christian faith. We see this plainly in the passing of Bill 21 in 2019 and the current work happening around Bill 96.

As the majority of our immigrants are coming from Asia and Africa, we can assume that many of them practice Islam, Sikhism, and other faiths that use head coverings of some kind in the practice of their faith. Bill 21 pushes a divisive expression of secularism in Quebec and targets non-Christians by banning teachers, government employees, and other public servants from wearing religious symbols- including head coverings like turbans and the hijab. The passing of this bill over 2 years ago has been a serious impediment to the lifestyles and employability of many in our immigrant population.

Similarly, Bill 96, currently under review, pushes for an unrealistic assimilation of immigrants into Quebec with its strong line around French language fluency and the 6 month window for language integration it proposes. While language preservation is an important part of any culture, it is unfair and exclusionary to force integration in a way that limits access to resources while also costing over-exploited , and underpaid immigrants to pay for classes. While there are some free alternatives and subsidies available, barriers like transportation, need for child care, and potential impact on school or work schedules should also be considered when we navigate language integration.

These are just two examples we can point to around the immediate difficulties around new immigrants coming to Quebec. There are dozens of more personal examples of discrimination and barriers to be conscious of when we further examine the intersections of our new immigrants, including but not limited to; cultural gender norms, family dynamics, and access to social and educational resources. These issues and obstacles may seem small, but it’s here where I remind you that these are things in effect for over 20% of our continental populationand the majority of that 20% existing in Toronto, Vancouver, and Montreal. The volume of people who these barriers affect only grow the more we fine tune our scope to look more closely at Quebec’s demographics.

It’s because of all of these details, both fine and bold, that organizations like Afrique au Feminin are so important. Organizations that look at immigrants as full people with diverse lives and experiences that need assistance both immediate and long term to best integrate and thrive in Canada are essential. Afrique au Feminin is an organization made up almost entirely of immigrant women of colour that helps women from all around the world as they come to Canada regardless of colour, creed, or economic status. It is able to do so because it takes an intersectional approach at how people and communities grow, expand, and thrive. Noting the needs of the individual as well as the community creates bridges between both for optimal outcomes that serve us all.

Learn more and make a donation in support of the Afrique au Feminin today. Visit https://www.afriqueaufeminin.org/  to learn more.