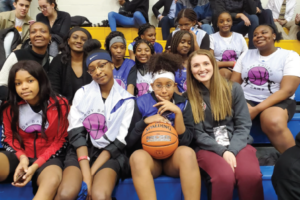 I am happy to share the story of a very special charity working to promote equitable access to recreational, educational and sporting programs: Lady Ballers Camp. The organization operates within an anti-oppression framework and they are committed to social change and removing gender, social and economic barriers in order for young racialized girls to reach their full potential. Their programming encourages non-competitive physical, emotional, and educational development, encouraging girls and young women to advocate for themselves and their communities, to promote far-reaching positive change.

Founded in 2012 by Toyo Ajibolade, Lady Ballers Camp started as a one-day event when Ajibolade was in high school. “I wanted to put together something for the kids in my community and see if there was a need for it. I played basketball through elementary school and high school and as things became more competitive I realized that a lot of families aren’t able to afford to have their kids participate in recreational activities,” says Ajibolade. “This is especially true for families that are living in economically marginalized communities—it was very personal for me to begin this charity. After that first event, it clicked for me that there was a really great need for free programming—especially for girls. Which has now expanded to so many other programs outside of just basketball.”

When the pandemic began it was clear that the camp couldn’t proceed as normal and the needs of their community had shifted. COVID has exacerbated existing inequalities and deepened inequity. “A lot of people, because they’re not living this reality, it’s hard for them to understand. For example, shifting to virtual school. A lot of our participants don’t have computers. These kids are not at the forefront when decisions are being made,” says Ajibolade. “They’re assuming that every kid has a computer, their own computer and that they have space, their own room—and that’s not the reality for a lot of kids. They share rooms, they share computers and now they’re falling behind in school … we had to pivot.”

Over this past year, Lady Ballers Camp tried to meet these needs by creating Back-To-School programming, providing laptop computers and tutoring to help participants with virtual schooling. They also concluded their “Innovate for Change” project, which allowed participants to develop an app designed to call out anti-Black racism, learning coding and design skills. “We are very much tailored to the population that we serve: black and brown racialized girls,” says Ajibolade. “They are at the centre of all of our programs, from the initial planning stages to completion, where we engage them in post evaluations and debrief sessions.”

“When we’re planning a program, we have discussions with our participants and figure out their needs and what they would like to see included. Throughout the program we gain feedback, we ask participants how they feel and check to see if the program is working for them. Do they feel supported, do they feel seen, do they feel represented? At the end of the day, the programs that we create are for them and we want them to feel included throughout the process. Also, it’s all free. No one pays to be a part of our programs. Not the drop-in sessions, summer camp—we’re trying to eliminate as many barriers as possible.”

In addition to these changes, the emergence of Black Lives Matter and the movement for social and racial justice greatly affected the community they serve. “We work with a large population of black youth. Some of the events from last year were particularly triggering—seeing constant images of racialized bodies being abused and treated unjustly… it really was triggering for a lot of our participants to see and experience that,” says Ajibolade. “It impacted them in two ways. There was the social injustice being displayed all around them and then economic inequalities being heightened as a lot of our participants are in high-rise buildings, in small spaces with their entire family. A lot of their release was going physically to programs, physically to school. It also impacted their mental health as they were inside all the time and they couldn’t go outside. We’d call and check in with them and we started working on different virtual programs, trying to get them engaged. Having some kind of community was very important for them during this time.”

The organization is looking forward to a return to their in-person programming: restarting basketball camp and recreational activities but they will also continue to innovate as they address the challenges facing their participants. “We’re an organization that wants to do mighty things, that wants to do a lot of huge things,” says Ajibolade. “No one else is doing what we’re doing in this space to keep the girls engaged.” They still don’t have the core funding which would ensure that these programs can scale and be offered on a consistent and reliable basis. I hope they get one soon!

“Last year we started gaining momentum as a society. People got exposed a little bit to a different world. I would just urge people to keep that momentum and allyship going: being allies towards racialized communities and speaking out against injustice. Helping in ways that you can. Honestly, that’s the greatest thing.”

Learn more about the Lady Ballers Camp on their Charity Profile page.