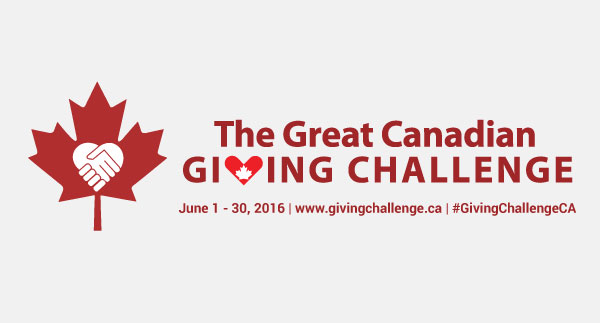 CanadaHelps is excited to announce The Great Canadian Giving Challenge is back for a second year starting June 1st through June 30th, and now is the perfect time to get your charity ready for a great month of giving!

What is the Great Canadian Giving Challenge and how does it work?

To help charities raise funds for their cause into the summer months, the Great Canadian Giving Challenge gives Canadians an impactful incentive to give to their favourite charity: for every dollar* donated to your charity in June via givingchallenge.ca or canadahelps.org, your charity has the chance to win a $10,000 donation, meaning the more your supporters give, the more chances you have to win the $10,000 prize and make a significant impact! On July 1, 2016 – a day when Canadians proudly celebrate our nation – one charity will be randomly selected to win The Great Canadian Giving Challenge’s $10,000 grand prize – how exciting!

We saw BIG results last year, and expect this year to be even bigger.

*Comparison of donations made using CanadaHelps in June 2015 versus June 2014.

Get your charity ready for a great month of giving starting June 1!

To leverage your charity’s participation in this year’s Great Canadian Giving Challenge, get your charity ready for a great month of giving:

Questions? Get in touch!

*Donations must be made via givingchallenge.ca or canadahelps.org. Minimum $3 donation required. Contest runs from June 1, 2016 at midnight Newfoundland Daylight Time (NDT) to June 30, 2016 at 11:59:59 p.m. Pacific Daylight Time (PDT). One (1) CAD $10,000 donation from The GIV3 Foundation to selected charity available to be won. Odds of charity winning depend on number of entries received. Math skill-test required. See full rules at: http://givingchallenge.ca/rules.html