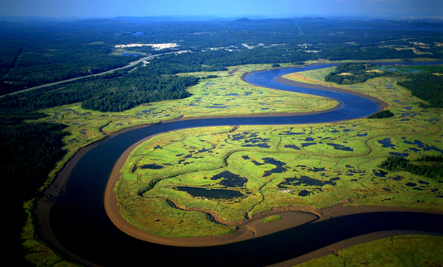 World Water Day, celebrated every March 22nd, encourages citizens around the world to celebrate water and calls for collective learning and action on water-related issues. With Canada being home to one fifth of the world’s freshwater, it is easy to forget that clean water is a precious resource.

Some say water is the lifeblood of this planet, and it’s true! The areas where land and water meet (wetlands, coasts, shorelines and stream banks, to name a few) are places that brim with biodiversity and rare species. The healthy state of these ecosystems is crucial for nature’s provision of services such as purification of air and proper nutrient cycling.

Healthy wetlands and watersheds play key roles in the quality of our water resources. They act like giant sponges that help absorb and replenish water to buffer flood and drought risks. They are also vital nesting, breeding and staging grounds for waterfowl and many other species and continue to be among the most diverse ecosystems of all!

But in spite of their important roles, our worlds’ wetlands are facing serious woes.

Troubling statistics estimates that 64 percent of world’s wetlands have disappeared since the 1900s (Ramsar Fact Sheet, 2015). Canada, home to a quarter of the world’s wetlands, is not immune to these trends. Southern Ontario for example has lost an estimated three-quarters of its wetlands through agricultural conversion.

Dan Kraus, Weston conservation scientist with the Nature Conservancy of Canada, says wetlands are under various kinds of human-induced environmental stresses. For example, “wetland losses have significant impacts on species, habitats and ecosystem functions, which is why there is a lot of interest in finding ways to mitigate and offset the negative impacts of infrastructure development on wetlands.”

The good news is that there is an increasing recognition and that humans and nature’s needs are inextricably linked together.

“We are coming to better understand and appreciate that nature is a key part of the infrastructure for our cities and communities. Just as we need pipes and pumps as a part of our water system, we also need healthy wetlands, rivers and watersheds to ensure a future of clean and abundant fresh water,” says Kraus.

Hope for Canada’s waters and wetlands 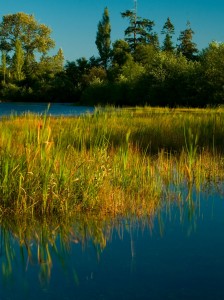 Conservation organizations like the Nature Conservancy of Canada (NCC) have long been working to protect and restore these precious ecosystems for the benefit of wildlife and humans alike.

In honour of World Water Day, here is a sampling of internationally acclaimed wetlands that NCC has protected across Canada:

British Columbia – The Campbell River Estuary, once an industrial site, is now a thriving hub of wildlife. After years of restoration efforts from NCC staff and partners, the estuary epitomizes nature’s swift ability to recover when given the chance. The area is a paradise for paddlers and a boon for wildlife-watching enthusiasts year-round.

Alberta – Just 100 kilometres southwest of Edmonton, the Coyote Lake Nature Sanctuary is one of the richest biological areas of Alberta, supporting more than 22 mammal species, 154 bird species and 266 plants species.

Manitoba – The Oak Lake Sandhills and Wetlands Natural Area, in the southwest corner of the province, supports migrating and nesting waterfowl.

Saskatchewan – Quill Lakes, located north of Regina, is ideal for shorebird and waterfowl watching. An Important Bird Area, the property is home to endangered species like piping plover.

Ontario – The Minesing Wetlands is one of the largest wetland complexes in southern Ontario. It is home to at-risk turtles, eastern prairie white-fringed orchid and many species of fish.

Quebec – The Malbaie Salt Marsh, where NCC owns 20 properties, features picturesque lagoons as far as the eye can see. Situated just 50 kilometres southeast of Gaspé, the area’s salt and freshwater composition is the perfect mix for a wide range of species.

There are many ways to “tap into” the water conservation conversation. If you’d like to get active and lend a helping hand to nature, conservation volunteering is a great way to make a difference for our water systems across the country.

The Nature Conservancy of Canada

The Nature Conservancy of Canada (NCC) is Canada's leading national land conservation organization. We are a private, non-profit group that partners with corporations, individuals, communities and government bodies to achieve the direct protection of our most important natural treasures.