This blog post was provided by Hannah Scott from the United Nations High Comissioner for Refugees Canada (UNHCR).

When you’re cold, what do you do? Do you run a warm bath, sit in front of the fireplace, or curl up in your heated blanket?

Sometimes we take for granted how easy it can be to stay warm.

In January of 2019, an informal settlement camp in the village of Duris, Lebanon, was hit by its harshest winter in years. Two storms swept through the camp, affecting hundreds of Syrian refugees whose shelters – which were already temporary and fragile – were damaged and flooded. Families were living in cold floodwater, struggling to keep warm in the winter temperatures. The United Nations High Commissioner for Refugees (more commonly known as UNHCR), the UN Refugee Agency, sent emergency aid and winterization assistance in the form of blankets, heaters, and insulation material to these refugees in Lebanon. 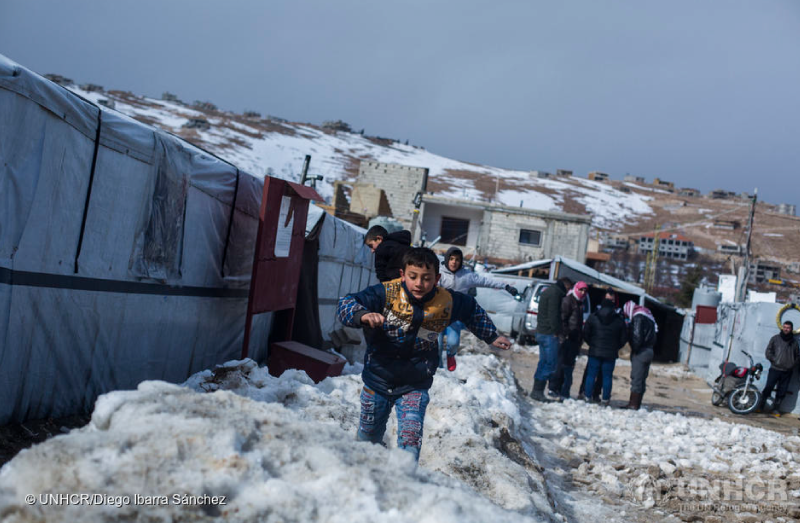 But that’s only one story – one camp – that faced the harsh conditions of winter.

Around the world, thousands of refugees living in hundreds of settlements are affected by cold and extreme weather events, and millions of dollars of aid is needed to support them.

So, who is a refugee? A refugee is someone who has been forced to flee their country because of persecution, war, or violence. In 2018, there were more than 25.9 million refugees. They were among the 70.8 million forcibly displaced persons worldwide fleeing at a rate of 25 people every minute.

More than two-thirds of the world’s refugees come from just five countries: Syria, Afghanistan, South Sudan, Myanmar and Somalia. These vulnerable people come from many parts of the world forced to leave their homes and loved ones behind for a variety of reasons all beyond their control.

A civil war that has lasted nearly a decade has led millions of Syrians to flee their country. Ongoing conflict in South Sudan has forced millions in the East African country to leave. Other groups, such as the Rohingya, a Muslim minority in Myanmar, saw hundreds of thousands of refugees — mostly women and children — forced to flee due to an outbreak of violence in 2017.

The numbers don’t lie—the world is witnessing the highest levels of displacement on record.

This is why the work of UNHCR is more important than ever before, especially when refugees are faced with staying safe and warm during the winter months.

Last winter, refugees and internally displaced people in Syria, Turkey, Lebanon, Jordan, Iraq and Egypt saw frigid temperatures and storms that posed serious threats to their daily survival. When winter hits, refugees are more affected than most. Already living in makeshift shelters that are often flimsy, sub-zero temperatures, snow, and frost easily penetrates their homes which can lead to illness. Living in unheated housing, refugee families rely on blankets and clothes distributed by UNHCR to keep them warm — but it is often not enough. If they are lucky, some refugee families will receive a heater that can operate for five days before running out of fuel. Some families even resort to burning trash to keep their shelters heated.

Whether refugees are displaced within their home country or have fled to seek asylum in a new one, winter is a battle.

Millions of refugees living in camps in the Middle East and Europe are affected by the cold temperatures and the harmful effects they bring each year. That’s why UNHCR’s winterization effort is integral to the survival of refugees throughout the winter months. By identifying the most vulnerable people, those who are most at-risk of being hurt or affected by the harsh winter conditions, UNHCR is able to give them the care they need.

Our winterization program includes distributing winter clothing, thermal blankets, solar lamps, and hot food and drinks to keep refugees nourished, warm and protected against the elements. We then work towards building, weatherproofing, and insulating existing shelters. At UNHCR headquarters in Geneva there’s also a “Winter Cell” where a group of individuals are responsible for monitoring weather forecasts worldwide. This team works to ensure we identify and notify our teams on the ground of upcoming storms and extreme weather events so we can be prepared to assist refugees in need.

In 2018, Syrian refugee Hilal had to prepare his family for their fifth winter in Jordan. Hilal, his wife Nihad, and their six children live in a poorly insulated house where they use blankets and carpets to cover windows and doors—hoping to protect them from snow and freezing temperatures. Nihad even attempted to make her own heater. As a feeble solution, they turn on the stove to warm up their makeshift house.

Health issues in their family make winter an even bigger battle for Halil and Nihad. Their 11-year old daughter, Milyar, lives with asthma and is at risk of infection due to the cold. Hilal himself has spinal and back problems and is unable to work. But with the help of UNHCR’s new winter cash assistance program, Halil was able to find heating and winter clothes for his children.

“Winter assistance is very helpful for my daughter Milyar. It helps us secure her a separate warm room and a carpet, blankets and clothes for school to keep her warm.” — Hilal

Winter cash assistance is distributed by UNHCR to help alleviate the financial burden that’s placed on families when they flee violence in their countries. Because cash is flexible, it means that specific needs — such as fuel for heating units or paying rent for a warm space — could be met for refugee families.

For Halil and Nihad, winter is more than just cold weather; it’s a daily struggle for survival. Their story is one of millions that reveal why winter can pose considerable challenges to refugees who are already vulnerable and in need of assistance.

Each year as we brace for winter, UNHCR stands ready to help refugees around the world who will be affected by the colder months. Through our winterization program, UNHCR works with refugee families to ensure that they are provided with the resources and help they need to battle winter – and win.

Learn more and make a donation in support of the United Nations High Comissioner for Refugees Canada (UNHCR) today!