Homelessness in Canada is a widespread crisis experienced coast to coast. Some population groups are more disproportionately affected than others including people dealing with mental health issues or addictions, Indigenous people, women with children fleeing violence, the elderly, or single adult men. It is estimated on any given night 35,000 Canadians sleep on the streets or in shelters and at least 235,000 Canadians are homeless in any given year. 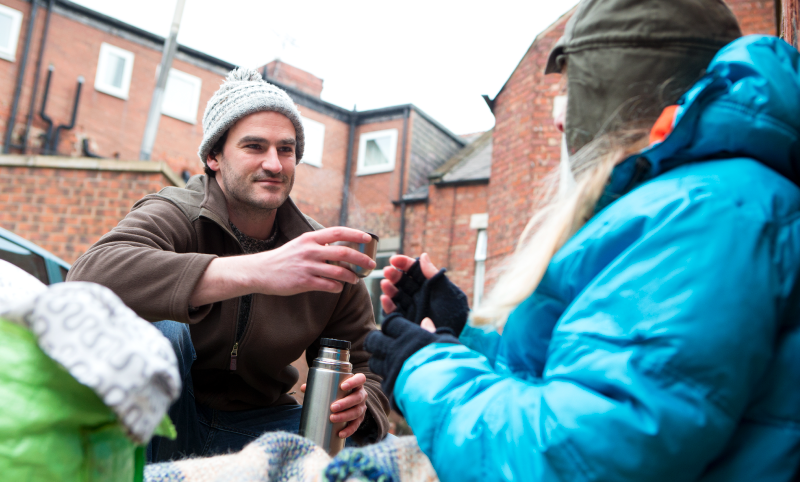 First established in 2017 in Toronto, the volunteer-run non-profit is creating menstrual equity by reducing stigma surrounding periods through advocacy, education, and outreach. Since its start, volunteers have collected and distributed thousands of purses and backpacks filled with menstrual products for those in need across Ontario, Regina, and Winnipeg. In 2018 the group worked with the City of Toronto to make May 28th Menstrual Hygiene Day and pass a motion to provide free menstrual hygiene products in shelters, drop-in centers and other similar spaces. That same year, the organization launched ‘Menstruation Nation’, a program for middle and high school students focused on teaching the importance of menstrual equity. Learn more about The Period Purse.

Homes for Heroes Foundation was developed in response to the growing number of Canadian Armed Forces members returning home and having a hard time integrating. As a result, an estimated 2,500 Canadian veterans are currently experiencing homelessness. In response to this, the foundation has partnered with The Mustard Seed to provide an affordable transitional living environment for veterans as they work to heal and reintegrate into society. This month, the program opened its first village in Calgary with 15 tiny fully equipped homes. They plan to open their next tiny homes village in Edmonton late next year and eventually have sites in British Columbia, Manitoba, Ontario, and the Maritimes. Learn more about the Homes for Heroes Foundation.

Hands Up Canada is a charity based in Toronto aiming to provide a better future for those who struggle to secure shelter, food, and education in some of Canada’s most marginalized communities. Their team supports Inuit women’s shelters and support groups by providing boxes of supplies like thermal clothing and flashlights, which are especially necessary when winter temperatures drop to as low as -60°C. They also support Nunavut and the Northwest Territories food banks and soup kitchens which face unique accessibility challenges as some are only fly-in communities. Learn more about Hands Up Canada.

This volunteer-run Foundation aims to relieve poverty by providing one of the most basic clothing items—socks. According to the Just Socks Foundation, socks are one of the most needed and least donated clothing items. Their team is working to reduce this gap as they raise funds to purchase a bulk order of subsidized McGregor Socks which are then delivered directly to partner charities that focus on reducing homelessness. To date, they have distributed 270,000 pairs of socks to individuals in Toronto, Hamilton, Vancouver and Lac La Ronge, Saskatchewan. Learn more about the Just Socks Foundation.

Based in Toronto, Engage and Change encourages communities to give back by providing opportunities to participate in hands-on-group volunteer projects meant to help individuals experiencing poverty. Volunteers assemble kits containing supplies meant for everyday survival and then distribute them locally through frontline social service agencies and homeless shelters. Engage and Change hosts two packing events each year, one in winter called ‘Project Winter Survival,’ where they aim to assemble and deliver 3,000 Winter Survival Kits which includes essentials for warmth. Their summer packing event is called, ‘Project Water,’ where this year the distributed 300,000 bottles of water and 3,000 Summer Survival Kits. Learn more about Engage and Change.

This Vancouver charity collaborates with grocery stores, wholesalers, and distributors to save surplus food and other goods from going to the landfill. Their team then makes them available for people living on a low income. The food is primarily offered out of one of their five affordable Not-For-Profit-Grocery Markets, a program that since being launched in 2014 has provided food for 1.5 million people. The markets are also unique because they are the first in Canada to offer Braille signage and audible scanners. Learn more about Quest Food Exchange.

The Shoebox Project was founded in Toronto in 2011 by four sisters-in-law who wanted to provide women experiencing homelessness with gifts during the holiday season when most gift drives were supporting children. The gifts are high-quality items worth $50 that are packaged inside a shoebox, then distributed to marginalized women in shelters. By distributing these gifts, their goal is to reduce isolation and enhance self-worth for women living in these situations when oftentimes they can feel forgotten, alone, or disconnected from society. Today a total of 180,000 shoeboxes valued at $90 million have been collected and distributed across North America, with 45 local-run chapters in operation all over Canada. Learn more about The Shoebox Project.