I don’t know a single person who isn’t broken in some way. While some of us are able to hide that brokenness, others wear it very close to the surface. I have spent the last two decades, most recently at The Dale Ministries, walking alongside people who are dealing with things that are hard to hide: being under-housed, struggling with addiction to substances and coping with significant mental health issues. I count these people as friends and am grateful that they have accepted me despite my own challenges – the ones that are maybe a tad more socially acceptable, but no less real. One of my friends is a woman named “Rose”;. This is her story.

Rose grew up in a home where it was commonplace to be physically, emotionally and sexually abused. She was once hit by a 2×4 simply because she got home five minutes late from school; she was routinely called worthless; she was raped. The resolve to prove her inherent value was replaced with resignation: if they really believe I am rotten, then I must be. Rose decided to run to the one place that seemed “free”: the streets of Toronto, where she began to live under a bridge in a house made of abandoned signs and a few sleeping bags. This house was cold, wet, noisy and, at least in her mind, safer than where she’d fled.

Rose thought the street would be free of people who would hurt her. She quickly learned this to be false. Rose pan-handled and prostituted herself in order to earn enough money for food. Over time the only way to cope came through the use of substances: things that numbed the pain and seemed to get rid of her tears. Rose recalls knowing the way society looked down on her, except she couldn’t see her way out. She was trapped, alone, scarred and judged.

Fast forward to today. Rose is housed, on day 35 of not smoking and sitting at her OWN dining room table where she has just served me tea in one of her grandmother’s china cups. What led to this change? In Rose’s words: she met people who began to check on her under that bridge who actually cared, who said they wanted to help and followed through, who believed she was valuable and had something to offer into their lives too. 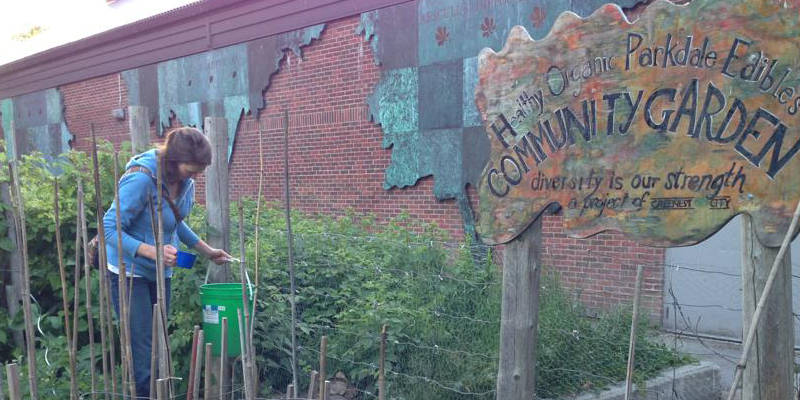 Rose’s struggles are not over. Her housing is costly and doesn’t leave much for other basic needs, she is plagued by regret and sometimes describes herself as “used up”, she occasionally relapses and needs to find the humility to admit this and try again. Fortunately she is sharing these struggles with her new family – the community that she has found at The Dale. I feel fortunate to count Rose as my friend. She has taught me a lot about surviving in the midst of terrible circumstances and being a transparent and vulnerable person. When I’m struggling and need to lean on her I know she gets it.

It is easy to not notice people under bridges and on street corners while simultaneously believing the stereotypical images and perceptions of “the homeless”. As a child, Rose did not plan to be a sex trade worker when she grew up. She is an interesting, multi-faceted person, one who loves cats, blending her own tea, and knitting. Rose is a woman with a history who still holds on to hope that she has a future. I am certain she does.