On today’s World Humanitarian Day, a day recognized annually on August 19th by the United Nations, we recognize the dedication and risk humanitarians around the world face while working on the front lines of some of the world’s most challenging circumstances. Working in some of the most remote and dangerous corners of the world, members of Doctors Without Borders/Médecins Sans Frontières (MSF) are among the thousands of humanitarians dedicated to saving lives. 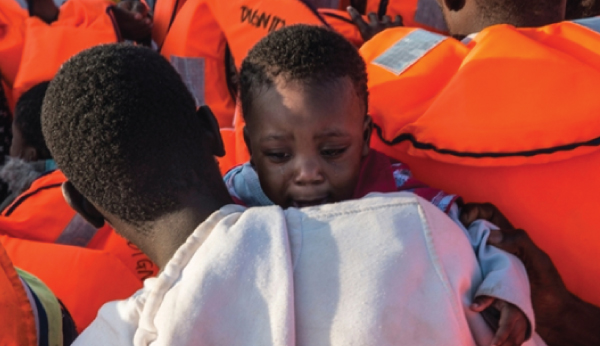 Since 2015, MSF has been running search-and-rescue operations in the Mediterranean Sea, in response to a humanitarian crisis that saw more than 4,000 people perish in 2016 alone while trying to reach safety in Europe and flee conflict, disaster and turmoil in their home countries.

Canadian nurse Courtney Bercan was recently part of the medical team on-board the MSF ship Dignity I, providing medical care to people rescued from boats in distress. In the first-person piece below, she shares her thoughts on the passengers she met who provided the most reasons for both heartbreak and hope: the children.

When a photo of a dead three-year-old Syrian boy — Alan Kurdi, who drowned as his family tried to reach safety in Europe by crossing the Mediterranean Sea by boat — was widely circulated in the media, I remember seeing the pictures and being horrified. I have two beautiful nieces and I tried picturing them in one of the flimsy, unsafe boats that make these journeys. I wondered at what point a parent makes the decision to accept that level of risk.

Then I saw an interview with a Syrian refugee woman that instantly brought everything into perspective. She said, “A mother does not decide to take the risk of putting her children in these boats unless the risk of staying where she is is greater than the risk of the boat ride.”

That heartbreaking concept is something I am constantly reminded of while working aboard Doctors Without Borders/Médecins Sans Frontières (MSF)’s Mediterranean search-and-rescue boat the Dignity 1, rescuing people at risk of drowning and providing them with care and safe passage. One day in October, when we responded to an exceptionally high volume of migrant boats in distress, it seemed like there were more young children present than usual — including a pair of five-day-old premature twin boys.

When I saw a woman board the ship cradling two tiny blanket-wrapped packages in her arms, I was immediately on alert. I had a quick and unwelcome memory of similar scenes from my time with MSF in Democratic Republic of Congo, where we often received baby patients when it was already too late to help them.

I was hoping that was not the case, but knew the boat voyage from Libya, which is dangerous for all, is even riskier for infant passengers. I was relieved beyond words when she uncovered the first little boy and his skin was warm, his colour, tone and respiration status normal. But I was shocked at how young he was. When I saw the second baby I noticed that he was even smaller, frailer and in worse condition than his brother. He was lethargic, cool to the touch and developed periods of apnea (during which breathing is suspended).

After warming the baby by placing him skin to skin with his mom, I saw his condition improve, but he then became too warm and was not regulating his temperature properly. His fontanelle was depressed, showing us he was dehydrated, but he was not interested in feeding. This is a challenging scenario even in a fully equipped hospital, and requires far more care than we could give him on-board our ship throughout the two days it would take to travel to Italy.

Luckily, a medical evacuation was able to be arranged quickly, and we transferred him by helicopter to a higher level of care within the hour. We all breathed a sigh of relief.

To be born a twin and premature is risky anywhere in the world; to be born a premature twin lacking any access to medical treatment is a likely death sentence. I have no question that it would have resulted in death for that child if we had not been able to get him to a hospital quickly.

With our two youngest passengers safely in hospital and our boat at maximum capacity, we continued to Italy and finally disembarked all our 435 passengers safely two days later. As a nurse, it can be difficult to fully appreciate the greater significance or emotion of a situation while in the midst of actually treating patients. (Especially when you have over 400 of them!) When you are so busy, sometimes it only hits you afterwards.

When I finally had the time to process some of the experiences from these rescues, I was brought to tears while listening to my field coordinator tell the story of the twins. The precarious new lives of these little boys, and the desperate situation of their mom giving birth unaided while essentially imprisoned and alone in Libya, hurt my heart.

We had many rescued children on-board with us during my time on the Dignity I. Each one had their own little, unique personality, and they skipped, bounced, played and got into mischief just like any kid in the world would. It makes me happy that most of them seemed unaware of the dangerous trip they were on.

Their parents shielded them from the worst parts of the journey, and their childish delight at a balloon or photo of them would light up the whole boat.

I am so happy we were able to give them a safe and dignified passage to a new future.

Courtney Bercan is a Canadian nurse. MSF continues to run search-and-rescue operations in the Mediterranean Sea, after rescuing more than 19,000 people at risk of drowning in 2016. This article originally appeared in the Winter 2017 issue of Field Notes, the MSF Canada newsletter.

To learn more about Doctors Without Borders/Médecins Sans Frontières (MSF), or to make a donation, visit their Charity Profile Page.