Think you know all there is about elephants? In the spirit of World Elephant Day happening on August 12th, learn some not-so-well-known facts about this incredible species currently under serious threat around the world. 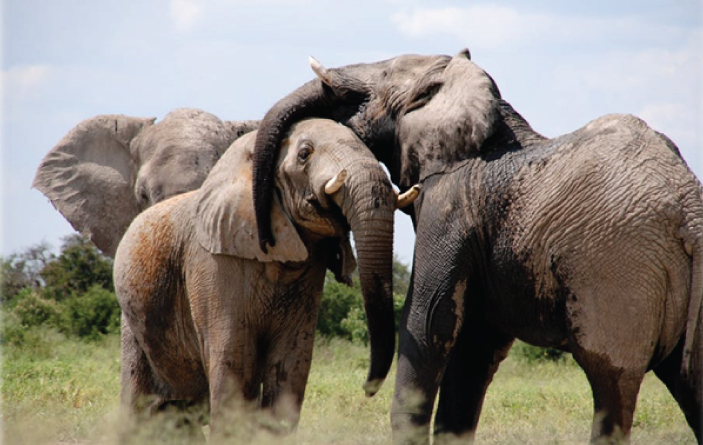 1. An elephant can consume up to 300 pounds of food in just one day.

Elephants eat roots, grasses, fruit, and bark, which can add up to about 300 pounds of food in just one day. They roam over great distances while foraging for the large quantities of food they require to sustain their massive bodies.

An elephant’s trunk is actually a long nose used for smelling, breathing, trumpeting, drinking, and for grabbing items such as food.  It is also used so they can give themselves a shower by sucking water into their trunks and spraying it all over their body.  Afterwards, they use their trunk to spray their skin with a protective coating of dust.

Some researchers believe the trunk alone contains about 100,000 different muscles. African elephants have two finger-like features on the end of their trunk, whereas Asian elephants have one, which they can use to grab small items.

3. Although elephant skin appears to be tough, it is actually very sensitive.

Since elephant skin is very sensitive, mud baths protect elephants from getting a sunburn which also help clean the skin of insects and ticks.

4. Poachers are becoming much more interested in other parts of the elephant other than ivory.

For decades, elephants have faced the threats of habitat loss, human-elephant conflict, and, to a lesser extent, poaching.  But in a disturbing and growing new trend, not only are Asian elephants being poached for their ivory tusks (only the males grow tusks), they are also being slaughtered for their skin, teeth, and nails.

The trade of ivory is illegal today, but unfortunately it has not been completely eliminated.  There has been an upward trend of ivory trade in South East Asia which some believe has been a result of an increase in wealth and high demand for ivory carvings.

Elephants are recognized for being among the most intelligent creatures on earth. Part of the reason that elephants possess this level of intelligence is the structure of their brain. Similar to a human brain, their neocortex is highly convoluted which can also be found in apes and some dolphins.

Self-awareness is another indication of their vast capacity for thinking.  They are able to recognise themselves in a mirror, something that is extremely rare in the animal kingdom.

Elephants can communicate with one another from miles away by making subsonic calls that vibrate the ground. Recently, a leading investigator in the field of elephant communications has discovered that elephants receiving the calls monitor the vibrating ground through both their feet and trunks. This allows the elephants to position themselves with several points of contact on the ground to triangulate the direction of the elephant making the call.

7. Elephants are pregnant for 22 months.

You think nine months is a long time for a pregnancy? As an elephant, having a baby is a significant commitment.  Elephants have a longer pregnancy than any other mammal, almost 22 months.  At birth, elephants already weigh some 200 pounds and stand about three feet tall.

8. Elephants play a key role in our ecosystem.

Elephants help maintain forest and savanna ecosystems for other species, and are integrally tied to a rich biodiversity. Elephants directly influence forest composition and density, and can alter the broader landscape.  In tropical forests, elephants create clearings and gaps in the canopy that encourage tree regeneration.  In the savannas, they reduce bush cover to create an environment favorable to a mix of browsing and grazing animals.

When it comes to planted species, many plants are dependent on passing through an elephant’s digestive tract before they can germinate.  It is calculated that at least a third of tree species in central African forests rely on elephants in this way for distribution of seeds.

9. Elephants are losing their habitat as a result of our decisions.

Elephants are losing their habitats and ancient migratory routes due to expanding human settlements, plantation development, and the construction of infrastructure such as roads, canals, and pipelines.

10. 96 elephants are killed every day for their ivory or other illegal trade.

That is one elephant every 15 minutes.

The Valley Zoo Development Society supports the Edmonton Valley Zoo, which is home to a charming and precocious Asian elephant named Lucy.

Lucy was orphaned in Sri Lanka and was brought to the Edmonton Valley Zoo in 1977 through partnership with the Pinnewala Elephant Orphanage and Colombo Zoo. Lucy is often called a “people elephant” and her herd is her zoo family.  Some of her keepers—which include veterinarians, veterinarian technologists, and a team of outside experts who evaluate her annually—have worked with her for over 30 years.  She has a particularly complicated medical issue that is known and responsibly managed.  That being said, Lucy’s health is stable and she has a fulfilling and comfortable life.

In addition to caring for an Asian elephant, the Edmonton Valley Zoo and the Valley Zoo Development Society support the International Elephant Foundation through the sale of Lucy’s enrichment artwork.  We invite you to learn more our international support of elephants, as well as our support of other international conservation efforts such as the Species Survival Plan listed on our website.

To learn more about the Valley Zoo Development Society, or to make a donation, visit their Charity Profile Page.